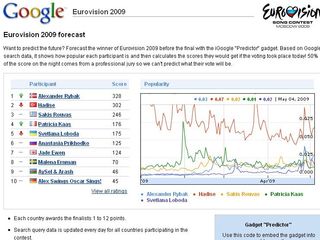 Oh look - the Eastern Bloc has voted for each other again

Google has revealed its Eurovision Song Contest application that purports to 'allow internet users to track the chances of their local entry winning 2009's competition'.

Even without the inimitable Terry Wogan at the helm, TechRadar will probably be glued to the television for this year's Eurovision song-contest, and it appears Google will be as well.

The gadget at www.google.com/eurovision will allow users to 'follow the rise and fall in popularity of online searches for different countries' entrants, with a popularity timeline graph and a table of the most to least searched-for contestants'.

Google search traffic has long been a measure of true popularity, although that is presumably skewed if the singer is particularly fetching or amusing which may or may not tally with votes for the song.

The Eurovision Song Contest finals are on May 16th in Moscow, and you can tune in to see the best of European jingoism, political voting and sheer lunacy, minus the wry genius of Wogan's commentary.

Just remember to switch off for the UK's godawful Andrew Lloyd Webber entry.