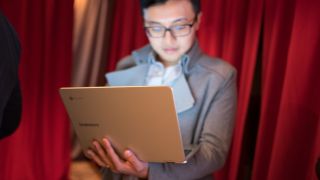 The ability to shoot Messages from both an iPhone and MacBook is the best thing about owning Apple’s devices, and now Google might finally be bringing that feature to its platform.

Chrome Unboxed reports a new SMS connect feature might be coming to Chromebooks. The new development was first seen by a tipster who forwarded a screenshot of the Samsung Chromebook Plus’ options menu.

Aside from the menu option, though, turning on SMS Connect doesn’t actually do anything yet. What’s more, to even get the toggle to show up, Chrome Unboxed had to dive into the Chrome OS’ config files and ‘enable multidevice features.”

For now it seems like a place holder, but with Google Assistant also rumored to come to Chromebooks, it seems Google’s two platforms will become intrinsically connected similar to Apple’s MacOS and iOS.