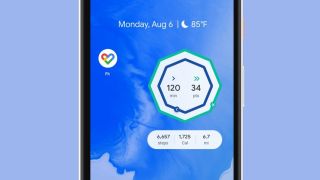 Google Fit has received a major overhaul – just in time for tracking the excesses of the festive period. According to Android Central, the app now shows your daily progress (including steps, calorie intake and time spent active) via smart widgets on your phone's home screen, which should provide motivation to avoid that second wedge of Christmas cake.

Your most recent workout will also appear on your phone's home screen, and when you log a workout in your journal manually, you'll be able to set a custom activity level. This enables the app to analyze it more accurately and produce Heart Points (a reward for increasing your heart rate during exercise).

Google Fit received its last big update in August, when it was redesigned to follow Google's Material Design style and altered to focus on heart rate rather than duration of exercise. The changes were based on recommendations from the American Heart Association and World Health Organization.

Despite their usefulness, widgets were removed during the August redesign, so it's good to see them making a return.

It's not all work, either; the redesigned Google Fit for Wear OS watches now offers new breathing exercises to help you keep your cool during the last-minute Christmas shopping frenzy.