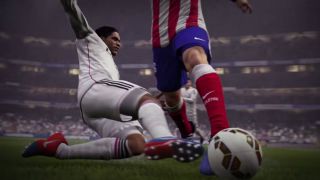 A new official FIFA 16 trailer made its debut at E3 2015, and the video shows that EA Sports is lacing up for its release date, which is two months away.

Additional AI tweaks enable you to control the midfield with better smarter teammates. EA Sports call this interception intelligence and passing with purpose.

The official FIFA 16 release date is September 22 in the US, September 23 in Europe, while the UK won't see the game until September 24. I blame Chelsea fans.

The FIFA 14 trailer at E3 2015 showed off new gameplay moves and spiffier graphics on Xbox One, PS4 and PC, but it left one thing out that was at EA's keynote: female teams.

There are going to be 12 female teams in this FIFA game, a first for the soccer franchise. This key feature isn't part of the isolated YouTube trailer, but was shown at EA's conference. A separate announcement trailer with the teams in tow can be seen here.

The FIFA 16 cover athlete hasn't been chosen yet. That's because there's an ongoing cover athlete vote that doesn't close until July 5. The winner is going to be revealed on July 8.

In addition to releasing on Xbox One, PS4, and the PC, FIFA 16 is also launching on last-generation consoles, Xbox 360 and PS3. However, it's not coming out on any Nintendo system for once.