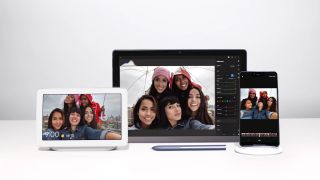 The Made By Google event hosted in New York may not have been as chock full of surprises as it could have been if the Google Pixel 3 hadn't seen so many leaks beforehand, but there was still plenty to get from the event.

Google announced not only the latest updates to its flagship Pixel phones, but also a new smart home hub, a tablet, and a number of accessories to enhance its devices.

Below we'll take a detailed look at all of the devices Google launched at the Made By Google event.

The Google Pixel 3 and Pixel 3 XL were the stars of the show, and Google took most of the time trumpeting the improvements to its phones' cameras and AI-powered smart features.

The Pixel 3 will have a 5.5-inch Full HD+ display, and the Pixel 3 XL will have a larger 6.3-inch QHD+ display with a notch. Both will have OLED screens, Gorilla Glass 5 on both sides, and front-facing stereo speakers. The back glass now combines the matte and glossy sections into a single piece of glass. The phones will come in three colors: Just Black, Clearly White, and Not Pink.

A Qualcomm Snapdragon 845 chipset with 4GB of RAM will power the Android 9 Pie experience, however the battery capacities seem a bit limited for phones of these sizes. The base storage is either 64GB or 128GB, and there was no mention of microSD card support.

The rear cameras remain 12.2MP, and can record video up to 4K at 30fps. The front now features two 8MP cameras, with one featuring a 75-degree FOV and the other a wide-angle lens offering a 97-degree FOV.

Google is also releasing the Pixel Stand wireless charger, priced at $79 (£69, AU$119), alongside the new phones. Docking a Pixel 3 on the Pixel Stand will turn the phone into more of a smart home display akin to the new Google Home Hub.

The Google Pixel Slate is the company's new 2-in-1 tablet running ChromeOS. While Google did mention a little bit about the hardware it's coming with, there were more questions left unanswered.

The Pixel Slate offers a 293-pixel-per-inch LTPS LCD display, and has 8MP cameras on each side. The front-facing camera has large pixels and a wide-angle lens, for good performance in low light and for capturing groups in video chat respectively.

Beyond the tablet experience, the Pixel Slate can be paired with the Pixel Slate Keyboard, which is a folio-style keyboard cover. It has round keys and full backlighting. The tablet also supports Google's Pixelbook Pen stylus. For a bit of added security, the power button doubles as a fingerprint scanner.

Google oddly left out any details about what hardware would be inside the Pixel Slate, even storage capacities. The base price will be $599 (about £455), and it will be available later this year in the US, UK, and Canada, but no Australian availability was mentioned. The Pixel Slate Keyboard comes in at an absurd $199 (about £150), which is even more expensive than Microsoft's Surface Type Covers.

The Home Hub will make getting YouTube videos and recipes easier, and when you check the weather you'll be able to see the forecast as well as hear it. Of course, it will also be able to control smart home devices, and in particular Nest products.

For families, the Home Hub will support voice recognition for multiple voices.

For a little extra peace of mind, the Google Home Hub doesn't have a camera, so you won't have to worry about it secretly recording your. But, it does feature a light sensor to automatically control the screen brightness and color.

The new Home Hub follows the design language established by previous Google Home devices, with fabrics used for the base. It comes in four colors.