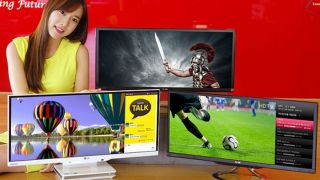 LG first unveiled its UltraWide EA93 21:9 monitor at IFA almost a year ago, but now it seems the South Korean electronics company has gone one further by creating an all-in-one (AiO) PC with the cinematic aspect ratio.

The V960 is powered by an Intel Core i5 CPU and a GeForce GT640M graphics card that includes 3D capabilities. Unsurprisingly, LG claims the PC is the one to watch, quite literally, if you're a film or TV buff, as it also includes a standalone TV tuner with instant-on.

Additionally, its PBP (Picture By Picture) function allows PC and TV activity to be shown simultaneously in each half of the screen. It also features a HDMI port allowing it to be used as an external monitor through connection with a set-top box or separate machine.

Of course, the display would also come in handy for anybody working with multiple documents side by side.

The machine is set to go on sale for between 1.49 to 2.29 million South Korean won, depending on the configuration. No word yet on UK pricing.