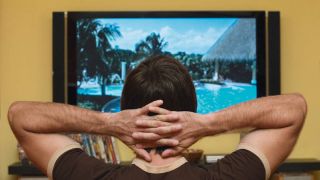 Let's say you've just bought a new flatscreen TV – or realized that the set you've had in your living room for the past decade is getting more than a bit dusty. How exactly are you meant to keep your television clean, and why does it matter?

While you may not be able to tell when the television is on, dust and dirt can easily accumulate both on the screen and around vents and speaker grilles – potentially dimming the image of the TV panel you worked so hard to buy, or just not letting your centerpiece look its best when guests are round.

Old homes with fireplaces, particularly, are prone to give the vents in expensive Hi-Fi kit a lot of debris in the air to deal with – we have not-so-fond memories of our old Xbox 360 wheezing from coal dust back in the day.

To stop you falling in the same trap, we spoke to the TV specialists at Richer Sounds to find out how to clean your television, and the most common pitfalls to avoid.

1. Use a lint-free cloth

When you're staring at the television screen all day, or all night (we don't judge) it's important to make sure there isn't any dust or grime getting in the way of the picture.

It's best to use a lint-free cleaning cloth, as this kind of material doesn't shed fibers when rubbing against surfaces – meaning you're not adding to the mess, generating static against the screen, or risking scratching any glass (the kind of cloth you use to clean your glasses works great).

And don't worry about whether your TV is an exception: small TVs and 65-inch screens alike will have a similar kind of glass display, regardless of whether it's an LCD, OLED, or QLED panel.

Whatever you do, don't stop wiping down halfway: an uneven clean may be even worse than a dusty one, as some sections of the screen will be less covered with dust than others.

Firstly: don't apply any spray, water, or cleaning solution directly to the screen.

You'll want to stick to just a dry cloth where possible, though if your television is particularly dirty – who knows how – it should be fine to slightly dampen the cloth with water before wiping it down.

It's important not to use a cleaning agent that's too corrosive, as regular cleaning products "can be too harsh for a TV and strip the protective coating off delicate screens." Even soap may be too much for it, though it depends how filthy your screen is (seriously, how?).

It's also best to avoid using too much liquid or a spray solution, as large amounts can seep inside the TV itself and damage parts of the hardware: "Liquid plus electricity is generally a bad idea!"

So you've wiped down your screen, but do you need to worry about the rest of it?

There's no harm in treating the casing in the same way – a dry or slightly dampened cloth – and it will generally be less sensitive than the screen itself.

Ports with leads or cabled attached shouldn't be letting in any dust, and AV kit these days generally doesn't need you to blow out dust every time to get it working – like the hefty game cartridges on the Nintendo 64. Empty ports though "may need a gentle puff of canned air every once in a while to remove dust."

And that's it! Enjoy your pristine television – and if you need any more TV guidance, head to our TV size guide, or see how to set up your TV for the perfect picture.