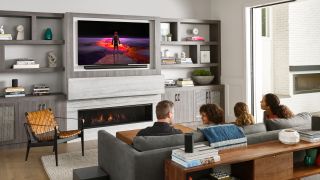 This year you might finally be able to afford an OLED TV.

Today, at CES 2020, Vizio announced its new 2020 TV lineup that includes several new models of its mainstream V-Series, M-Series, P-Series and P-Series Quantum screens as well its first-ever OLED TV and a monstrous 85-inch version of the P-Series Quantum X that has been updated for 2020.

According to Vizio, the new OLED series will be available in two screen sizes - a 55-inch and 65-inch version - and will use Vizio’s IQ Ultra processor for upscaling. The other obvious benefit to the new OLED is that it will have better viewing angles than Vizio’s traditional LED-LCD screens, making it a better option for wide living rooms.

While it can’t do pixel-by-pixel light control like the OLED can, the 85-inch P-Series Quantum X will have a wildly impressive 792 contrast control zones and, like last year’s models, reach up to 3,000 nits of peak brightness.

The P-Series Quantum X will again use a Quantum Dot filter to cover more of the DCI-P3 and Rec. 2020 color spaces and also come in 65- and 75-inch iterations if you don’t need an 85-inch TV in your living room this year.

The two TVs listed above will come with Vizio's new voice remote, and all TVs in Vizio’s 2020 lineup will include the new-and-improved SmartCast 4.0 platform and HDMI 2.1 ports plus support for all major HDR formats including Dolby Vision and HDR10+, a huge boon in the divided HDR landscape.

[Update: For those curious about where the OLED panel is coming from, all signs point to LG. When asked, LG's Senior VP of Communications said he couldn't be sure that the panel was coming from LG Display, but considering that they're the only place making OLED panels above 10-inches, it seems likely that they'd be sourced from LG. How that impacts the price, however, remains to be seen.]

So how much will all these new TVs cost?

Like most other TV manufacturers, Vizio doesn’t disclose pricing for its new TVs at CES - it waits until March or April when the TVs start coming out to issue a separate press release.

But while we don’t know how much the new OLED or the 85-inch P-Series Quantum X will cost, unfortunately, we do know that Vizio has long been an advocate of affordable high-end TVs. Its original P-Series Quantum TV was definitely aimed at Samsung’s QLED range, but was available at half the cost of Samsung’s higher-end models. The P-Series Quantum X, released last year, took things a step further by rivaling some of the most expensive TVs on the market - Sony’s Z9G LED-LCD TVs - again at a fraction of the cost.

While none of that ensures that we’ll see a bargain basement price from Vizio on the new OLED, there’s at least a historical precedence of it happening.

That said, if we get some time with Vizio at the show this year we'll certainly ask about price just in case they feel like letting the cat out of the bag a little early.