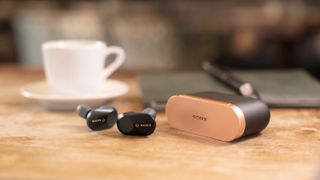 Following the smashing success of Sony’s flagship noise-cancelling cans – the WH-1000XM3 – the Japanese tech giant is adding another member to the family in the form of true wireless headphones.

The similarly named Sony WF-1000XM3 brings much of the over-ear variant’s prowess and appeal to a more portable form factor.

One of the most impressive aspects of the WH-1000XM3, and a big factor in making it one of the best wireless headphones available today, is their noise-cancelling capabilities, and with these new truly wireless in-ears, Sony is promising the same quality.

A pair of external microphones on each bud feed external noise to the dedicated QN1e noise-cancelling chip (an improvement on the WH-1000XM3’s QN1 chip), where it intelligently blocks out background noise and ambience.

This same advanced chip is responsible for 24-bit digital-to-audio conversion, as was the case in the WH-1000XM3. Combine this with Sony’s Digital Sound Enhancement Engine HX – a feature that upscales audio in a compressed format to bring back some lost fidelity – and these in-ears are set to sound as rich as their over-ear counterparts.

A common complaint among true wireless buds is their penchant toward connectivity issues, often caused by one earbud needing to pair with the other via Bluetooth. Apple’s AirPods manage to avoid this by using a dedicated chip to connect both directly to the device, and Sony is employing a similar strategy with the WF-1000XM3, promising increased stability.

The WF-1000XM3 have a reported battery life of 6 hours and, as is the situation with most true wireless earbuds, these Sony offerings come with a charging case, capable of recharging them thrice more for a total of 24 hours listening time. A quick charge function should give you 90 minutes mileage out of a snappy 10 minute charge too.

Another winning feature borrowed from the flagship over-ear cans is Sony’s Quick Attention mode, which allows you to place a finger over the left earbud’s touch control to momentarily lower the volume of your audio and let in ambient sound, so you can hear what's happening around you.