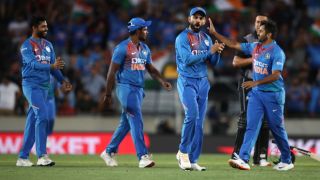 Virat Kohli's army in blue marches on and, with two T20 cricket wins already secured over New Zealand in the last few days, it's looking to seal victory in this five-match series early. To make sure you don't miss a single six or wicket, we've put together this guide to getting a New Zealand vs India live stream from pretty much anywhere in the world.

New Zealand vs India T20 series - where and when

The remaining matches start at 8pm NZDT. So that's around 12.30pm in the afternoon in India's IST time zone (or 7am GMT, if you're somewhere else and trying to work out the start time).

New Zealand came into this five-match series looking to bounce back after a 3-0 test thrashing to great rivals Australia and a Super Over loss to England in their last T20I. But visitors India have chased down pretty gettable targets twice in succession.

Follow the instructions below to find out how to grab a New Zealand vs India live stream from pretty much anywhere on Earth and see which side can gather momentum ahead of the World Cup later in the year.