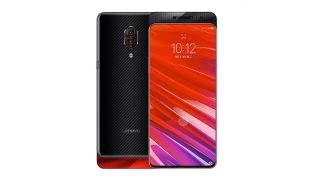 The Lenovo Legion is posed to be the first 5G gaming phone, and we now have every reason to believe that it'll have Qualcomm's Snapdragon 865 chipset onboard.

An alleged press image of a Lenovo Legion phone (below), first posted on Weibo, was shared by GizmoChina. While there isn't much to see, it's clearly Lenovo's Legion branding, which is specific to gaming products.

We've already seen plenty of companies offer fancy gaming phones that dial up the clockspeeds or display 120Hz refresh rates, but we haven't seen one yet that can connect to  the next-gen 5G networks.

Presumably, the Lenovo Legion gaming phone will come with some other gaming-centric specs. Lenovo may add some special cooling to offer high clockspeeds on the Snapdragon 865, and it will likely tout the 5G connection as a way to stream more games.

Given that even the Samsung Galaxy S20 display is going to offer a 120Hz refresh, it would make sense for a gaming-oriented Legion phone to offer a similar spec.

What else can Lenovo do to be different

The crowd of gaming phones it getting more packed. The Razer Phone 2, Asus ROG Phone 2 and Black Shark 3 have cornered the market, and Lenovo may not break in so easily. It's also unlikely Lenovo will break into the US market, as it has kept its own branded phones outside and left Motorola to cover the US.

Lenovo could try to undercut prices, but there's limited room to trim specs when including the high-end Snapdragon 865. One area Lenovo could explore is VR. It's competitors in the gaming phone space don't have as much going on in VR as Lenovo does.

Lenovo has made headsets for Windows Mixed Reality, and the phone-slotted-into- a-headset could still work. Even the delightful Oculus Quest runs on just a Snapdragon 835 chipset. The Legion phone's chipset would offer considerably more power, and that paired with some Lenovo know-how in VR could turn out an interesting product.

Of course, Lenovo might just release a cookie-cutter gaming smartphone that has high-end specs, some gamery design elements, and a big, glowing "Y" on it. After all, this is the same company that has started making gaming laptops that can't game.