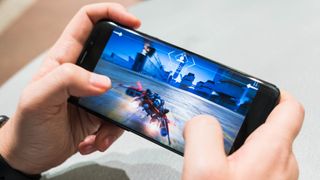 As time goes on we’re seeing more and more specialist gaming phones built from the ground up to provide the best gaming experience possible. We’re talking phones like the Asus ROG Phone 2 and the Razer Phone 2.

These are phones that push smartphone hardware to the limits, with the upcoming Black Shark 3 for example rumored to be the first phone to pack 16GB of RAM.

But as good as these phones are, many of the very best phones for games aren’t even billed as gaming phones, they’re simply high-power flagships like the Samsung Galaxy S10 Plus and iPhone 11 Pro Max, the latter of which also benefits from access to the stupendous game library of the App Store, and exclusives on Apple Arcade.

And over in Android land far more great gaming handsets are soon to launch – the Samsung Galaxy S11 is being announced on February 11, and many more top-tier Android handsets are likely to land a couple of weeks later at MWC 2020.

So there’s a ton of great gaming phones to choose from and loads more on the way, but this guide should make picking one easier, as below you’ll find a ranked list of the very best gaming phones available – whether they’re billed as gaming phones or not.

Our overview of each of these handsets will show you at a glance the features that make them so well-suited to gaming, as well as those areas where there’s room for improvement.

The iPhone 11 Pro Max is the bigger, better brother of Apple's newest flagship smartphone in a few key ways, but if you're picking either model for gaming, you might as well go with the best.

Those perks will give you more of an edge than with the iPhone 11 Pro, but both benefit from this Apple phone generation's true advantage: the A13 Bionic processor.

In our tests, it loaded up Clash Royale and PUBG even faster (vs the iPhone X), and speed is crucial in online gaming. All this in a Apple's sleek, modern look – though it's the most expensive mainstream phone on the market, even before including all the bells and whistles.

A strong gaming phone at an affordable price

The OnePlus 7 Pro is cheaper than the iPhones and Samsungs in this list, but still delivers the latest power under the hood with Qualcomm's Snapdragon 855 chipset and the choice of up to 12GB of RAM.

It means games load quickly and run smoothly, and the OnePlus 7 Pro is the firm's first phone with a QHD display, giving you an excellent pixel density for crisp graphics. On top of that sharp resolution is the huge size of the display, which offers 6.67 inches without any cameras or notches taking up space. Further improving the gaming experience is the 90Hz refresh rate of the display, which makes gaming and everyday use that much smoother.

There's a sizable 4,000mAh battery too, which should keep you going during lengthy play sessions, and it all makes for a top-notch gaming phone.

Don't be too surprised to see Samsung so high on the list. Its latest family of Galaxy S10 smartphones are the first to feature Qualcomm's powerful new Snapdragon 855 chipset, which quickly boosted them to the top of the pack in terms of sheer performance.

But, it's not just the chipset that makes these excellent gaming phones. They have sharp Super AMOLED displays with support for high dynamic range, so you'll get excellent visuals in movies and games alike.

The screen real estate is also expanded, so you have that much more game to look at. With these phones, you're getting both a killer phone and a powerful mobile gaming device in one.

Better still, VR fans can still make use of the new phones with existing Gear VR headsets letting you enjoy the immersive game medium on the phones' crisp displays.

Built from the ground up for gamers

The Asus ROG Phone 2 has almost all the features mobile gamers need, including a staggeringly large 6,000mAh battery (for extended gaming sessions), and a slick 120Hz AMOLED screen, in a large 6.59-inch size.

Add to that truly top tier specs, with the combination of a Snapdragon 855 Plus chipset, 12GB of RAM and masses of storage, and you can see why the Asus ROG Phone 2 makes our list.

Being designed specifically for gamers, it also has features you won't find on most other phones, such as a clip-on fan, which is generously included in the box, and a range of other accessories (such as a gamepad), which you'll have to buy separately.

There's also built-in software to help you tailor your gaming experience, through, for example, overclocking the already meaty CPU, and adjusting the fan speed.

There are some issues with the Asus ROG Phone 2, but most of them don't affect gaming. It doesn't have wireless charging or water resistance for example, and the design is sure to be divisive. If all you want your phone for is gaming though, and you either like this design or don't much care, then the Asus ROG Phone 2 is hard to beat.

Gaming-specific features that outshine its everyday ones

The first Razer Phone was a solid first effort to bring the gamer-specific brand to a mobile device, but it had a few shortcomings that dropped it further down our list. The second version has addressed some and come out with a stronger device for it, though it's still aimed primarily at gamers.

What does that mean? The camera and display aren't nearly as impressive as other phones that cost this much, so casual gamers might want to look elsewhere. But if you're more serious about mobile gaming and can afford it, this is a solid choice.

Outwardly, the Razer Phone 2 hasn't changed much from its predecessor, though it's upgraded to the Snapdragon 845 chip and switched to a glass back for Qi wireless charging. It's also added a slick vapor chamber to cool the device as you game.

At the end of the day, the phone's beefy chipset, 8GB RAM, great speakers, 120hz refresh rate screen and 4,000mAh battery, as well as extensive settings to tweak battery life and performance, make this a great choice for gaming.

Huawei's P30 Pro may not be a phone on many people's radars, but it's an amazing Android phone from the Chinese manufacturers. Much of the attention the P30 Pro is getting comes from its impressive camera system, which has three rear cameras including one with a 5X zoom and a stunning dark mode.

But, the Huawei P30 Pro has plenty to offer gamers as well. The Kirin 980 chipset inside is plenty powerful for the latest Android games, and 8GB of RAM can keep everything running smooth even when you're switching back and forth from gaming and other activities.

The hefty 4,200mAh battery can ensure your gaming sessions aren't cut short. An improved heat pipe and vapor cooling chamber inside the P30 Pro help it keep cool while gaming, so it can continue to play Fortnite, Real Racing 3, and PUBG without a hitch.

The best gaming phone for those on a budget

The Black Shark 2 is the second generation gaming phone from Chinese firm Xiaomi's gaming arm, and it builds well on its predecessor adding more power and a better screen into the mix.

Combining a great camera, excellent internals and improved gaming credentials over the original, the Black Shark 2 is a triple threat that betters most of its gaming phone rivals.

It's lumbered with a handful of instabilities and quirks, but even with those accounted for, the bang for buck it delivers is off the chart. The only thing to watch out for is its availability. It's not easy to find in some countries, such as US.

The most affordable of the new iPhones

Apple's iPhone XR may lack some of the features from the iPhone XS and XS Max that make them true stunners, but it makes up for that with a lower price. And, while it may have a smaller screen, it's still offering 6.1 inches.

Even though that lower price comes with caveats, like a simpler camera setup, the iPhone XR doesn't skimp on internals. It packs the same A12 Bionic chipset that's found in the more expensive models, and it runs iOS 13 just the same as the other models. That means it can play all the same games, and it can run them just as smoothly (if not even smoother, since it has fewer pixels to push).

The iPhone XR also has one of the best batteries in an iPhone that we've seen in some time. So, if you want to do plenty of gaming on iOS, the iPhone XR is a strong option.

The LG G8 may be a little underwhelming in terms of design, and if you don't find a deal, it can be too expensive to wisely choose over one of the other devices on this list. But, if you find a good price, it has enough to offer as a gaming phone.

Inside, it's packing the latest Snapdragon 855 chipset, which can deliver plenty of gaming performance. And, with a high-resolution, bright OLED display, your games are sure to look great.

With a base storage of 128GB of RAM, you should have plenty of room on the LG G8 to store games alongside all your other apps and files.

Yes, we know the iPhone 8 Plus is verging on two years old right now. It doesn't have the same elegant design found in the iPhone X, XS, or XR. But, if you look past the design and 5.5-inch display, you're still getting some strong gaming credentials.

For one thing, the age of the iPhone 8 Plus helps bring the price down. And, though the screen is the smallest on this list, it's still a 1080p resolution. Better still, the iPhone 8 Plus packs the A11 Bionic chipset that's also found in the iPhone X, and it runs on the latest version of iOS. That gives it access to plenty of games and the power to play them.

The battery is also decent, and the 256GB storage option offers all the room you could need for a substantial mobile game collection.

iPhone 8 Plus 64GB
Ting US
No contract