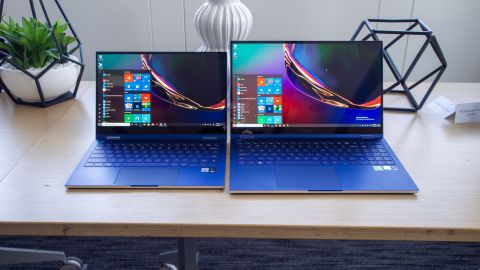 With brand new QLED displays, wireless device charging and a new naming convention, Samsung is looking to revamp its laptop line entirely. But, with many details still unknown, it’s tough to be too excited for these new devices.

Samsung’s looking to breathe new life into its series of laptops, dropping the “Notebook 9” name in favor of one closer to its laudable phone products. Smart move, but can name alone save Samsung’s sometimes-dashed laptops?

Of course not, which is why Samsung has brought along some truly unique – if ill-conceived at times – features, such as brand new display technology and wireless device charging.

But, will that even be enough to challenge Samsung’s rivals in the flagship laptop space? Well, without any inkling of an exact price or release date, we’ll say that we’re cautiously optimistic.

This is paradoxically both an easy and difficult aspect of the Samsung Galaxy Book Flex to cover because Samsung has decided not to disclose a price or release date for the laptop.

During our briefing with the company recently, we’ve been told to expect the Flex’s price to land in a similar range to that of the Samsung Notebook 9 Pen.

That gives us a bit of a lead at least on the 13.3-inch model to fall somewhere around $1,399 in the US, with the 15.6-inch configuration around $1,599 to start. At any rate, here’s what you’re getting in Samsung’s two Galaxy Book Flex configurations – with very little in specific.

Both models will feature 1080p (1,920 x 1,080) QLED touchscreens, 10th generation Intel Ice Lake processors (CPUs), up to 16GB of LPDDR4x memory (RAM) and as much as 1TB of NVMe flash storage. Both laptops will also feature Wi-Fi 6 connectivity and 720p HD webcams, along with fingerprint readers on the keyboard and Samsung’s S Pen built into the frame for easy storing and charging. Oddly enough, both laptops will feature the same amount of ports in spite of the extra space on the 15.6-inch model: two Thunderbolt 3 ports, one USB-C 3.1 port, a MicroSD card reader and an audio jack.

Also, the 15.6-inch model will have optional Nvidia MX250 graphics support. Finally, it’s also odd that both models will house the same 69.7 Whr battery inside, especially considering the larger screen and option for dedicated graphics. Either way, we can expect to pay at least a grand to start for these laptops, beginning with the 13.3-inch configurations.

The Galaxy Book Flex brings back Samsung’s neat royal blue color found in lots of its older Ultrabooks, and it is a good means of standing out from the silvers and grays. The laptops are surrounded by chrome chamfered edges on its sides, where the hard connections reside.

It’s an awfully square design, which is a stark departure from the rounded corners we’re used to seeing on Samsung laptops, which embodies the direction the company is looking to take with these new models. Samsung wants to develop a stronger brand for its laptops, hence dropping the “Notebook 9” naming.

That said, Samsung retains the stowable S Pen design as well as the squared 360-degree hinge from models of the past. While we’re not huge fans of convertible to begin with, so we’ll say we’re just fine with the hinge – it feels sturdy enough, but the lack of any rubber on the laptop’s lid could make tent mode a little difficult to use beyond movie watching.

The S Pen implementation remains one of the best among 2-in-1 laptops, we’re happy to find out. This lightweight and low-touch stylus may not have the heft of Microsoft’s Surface Pen, but it has even better software implementation and inarguably more portability. The stylus also displays plenty of pressure sensitivity.

Speaking of sensitivity, we do wish that the keyboard on the Galaxy Book Flex would be less sensitive and squishy and more forceful in its feedback returning to that default state. It’s not the most ideal typing experience for a laptop of its price. That said, we appreciate the inclusion of a fingerprint reader amongst the keys. It’s an odd placement at first, but it makes more sense the more we think about it.

We also appreciate the touchpad for a specific reason. Sure, it’s smooth and accurate glass, but its surface doubles as a wireless charging station. The feature works brilliantly, if a little ill-designed: certainly no one else is offering such a feature right now, but this also can only be used when you’re not actively using either your laptop or phone. A scenario in which you’re not on your phone or your laptop is a rare one these days.

As for the display, this is the first-ever using Samsung’s QLED technology, bringing its top-end TV screen tech to laptops. This is definitely one of the most vibrant laptop displays we’ve ever seen, even at 1080p, though surely a sharper resolution would only do these displays better.

Colors are full and rich on the QLED panel, which should please digital artists. Though, we wonder whether pixel technology alone would pull those folks from tablets or laptops with more robust styluses or stronger graphics power. If that doesn’t do the trick, Samsung’s promise of legibility in any lighting condition, with up to 600 nits (!) of brightness, may work. (This will obviously be a blow to battery life, but as to how much we’ve not been given an estimate.)

It’s difficult to list anything more than expectations of performance when it comes to a hands-on review, but we do know what will be inside these laptops. Intel Ice Lake brings the company’s storied 14-nanometer (nm) process down to 10nm, which obviously means more transistors within the same die.

More transistors means better performance for generally the same power draw, and that’s what we’ll likely see here, judging by our previous tests of laptops and tablets running the latest Intel silicon. However, we’re not yet seeing the promised battery gains of Ice Lake that Intel promises, at least not on the Surface Pro 7, though much of this relies on firmware as much as the more advanced hardware.

At any rate, expect somewhere hopefully close to Samsung’s own promise of “all-day battery life” from the Galaxy Book Flex, and performance that can chew through multi-faceted workloads.

We appreciate Samsung’s attempts to reinvent its line of laptops with new branding and features that no other laptop can claim. Particularly, the QLED displays with sky-high brightness are the laptops’ marquee feature – after all, you are looking at a laptop’s display constantly.

It’s also easy to appreciate Samsung’s wireless charging implementation, though its use cases are going to be extremely limited being placed on the touchpad. We get that this obviously can only be done on glass surfaces, but perhaps Samsung could have implemented glass on the lid or keyboard deck somewhere. As it is, you’re likely only ever to use this feature when you’re stuck with one charger and no USB-C cord for your phone to charge.

It’s difficult to say much more about these laptops without knowing when they’ll release and for how much, but consider us cautiously optimistic for Samsung’s next evolution for its laptops.