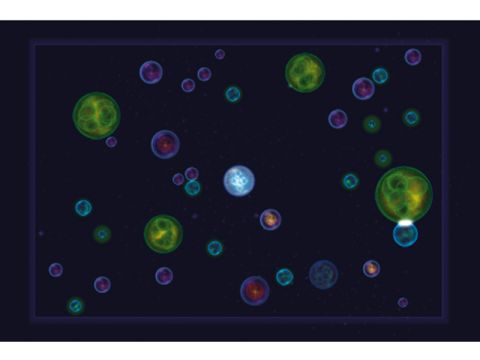 Gobble up all the smaller motes. Those green sentient motes are out to get you though

Osmos is a new entry in the small but growing genre of organism games. Like the early stages of Spore and the Mac game Tasty Planet, the idea here is to move your organism (or mote) around the play area absorbing other motes in order to grow.

You can absorb only motes smaller than yourself; touch one larger than you and it'll absorb you. Game over.

In order to move you have to fire off little bits of your mote to achieve opposite thrust. In doing so you have to deal with momentum and be careful not to overuse this means of propulsion or your mote will end up very small again and vulnerable to attack.

You'll encounter motes of varying types, some of which repel you, others having a gravitational effect – all of which radically change the challenge and the approach required to ensure victory in mote world.

Osmos is fascinating and frustrating in just the right measures, and with its cool visuals and ambient soundtrack, it's an experience not to be missed.