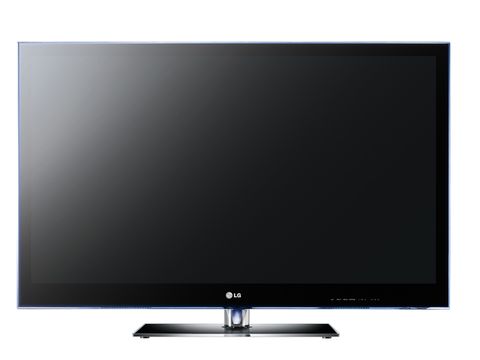 Although big TVs are still lazily called plasmas by the mass media and Great British Public alike, LED is fast piling on the sales.

Key to that tech's success is its innate slimness, but the 50PK990 - LG's flagship plasma TV - seeks to regain some ground by squeezing a Freeview HD tuner into a superbly designed frame that's just 52mm deep.

There are few TVs this starkly simple; the screen surround is hidden behind the TV's glass, giving an all-in-one look that's tinged with blue on all sides.

Even the desktop stand shows invention; a transparent neck cleverly soaks-up the blue light around it, to stunning effect.

LG calls this the 'Infinia' design – the 50PK990 is part of the Korean company's new Infinia sub-brand, designed to signify that these are the high-end screens in its bulging collections of flat TVs for 2010 (over 50 at the last count).

Quite how LG's engineers have achieved such aesthetic opulence (which comes complete with touch-sensitive, yet invisible controls along the bottom of the screen) is unclear, because alongside that Freeview HD tuner is a host of extras and add-ons that serve to make this 50-inch plasma surely one of the most advanced around.