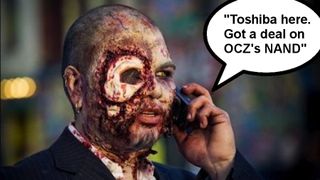 OCZ has been brought back from the dead by Toshiba

Toshiba snapped up California-based OCZ's assets back in December with the intention of turning it into a NAND-focused subsidiary. That transformation is now complete following the finalisation of the purchase.

In a statement, Toshiba said it will relaunch OCZ as a provider of high-performance SSDs for computers and systems. OCZ will continue to use its brand and current product portfolio under the terms of the new deal, but will also use Toshiba's NAND memory technology, combining it with OCZ's "controllers, firmware and software".

Back in a solid state

Toshiba vice president Seiichi Mori said that the acquisition would be instrumental in the furthering of Toshiba's storage in a high-growth area. The SSD market is indeed looking to be growing rapidly, with analysts Gartner predicting a growth in value to nearly $4 billion (£2.4 billion, AU$2.7 billion) by 2016.

The acquirement of OCZ means that the company is one of the few in the SSD industry with advanced controller IP and NAND flash supply in one global organisation. The issue of NAND supply almost doomed the storage company, which had lost almost half its revenue on the previous year by the final quarter of 2013.

Toshiba said OCZ will continue to operate independently, and its headquarters will remain in California, with strategic design centres located in Tel Aviv and Abingdon in the UK. Not resting on its laurels, the company has announced the latest generation of its Vertex-branded SSDs.