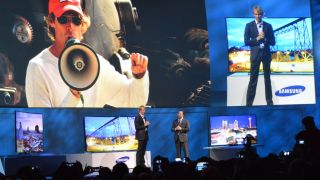 You don't need a crystal ball to see what the future of technology holds. Every Consumer Electronics Show lays it out for you. You've just got to know where to look.

So judging by CES 2014, we can expect a future where 8K is the new 4K, consumer-friendly Steam Machines battle the PS4 and Xbox One for living room shelf-space, and everybody wears a fitness tracker. Heck, even the idea of the digital home is making a comeback, while VR continues to enjoy the coolest of reboots.

So here is our list of gadgets, gizmos and concepts that have the potential to disrupt and improve our digital world...

Yes, Nvidia's newest quad-core chip isn't a gadget per se. But imagine the next-gen gadgets that it could power with its 192 CUDA cores, desktop-class Kepler architecture, DirectX 11 and Unreal Engine 4 support. Nvidia claims that the K1 can outperform the Xbox 360 and PlayStation 3, delivering new levels of graphical realism in slate-style playthings that you can hold in the palm of your hand. No TV required. Nvidia plans to set the K1 free later this year in 32-bit 2.3GHz and 64-bit 2.5GHz versions. We're excited to see the devices it will power.

With VR headsets, digital watches and Yahoo launching new products, you'd be forgiven for thinking that you'd stepped back in time to CES 1995. But back then, when teenagers stood agog at the Lawnmower Man in cinemas and tuned into the X-Files on TV, Virtual Reality promised a digital escapism that the technology couldn't deliver. Nineteen years later, the Oculus Rift is amazing people all over again and the updated 'Crystal Cove' hardware, with its 1080p OLED display, adds positional tracking, reduces latency and eliminates motion blur for a more nausea-free, immersive experience.

No. This list isn't ALL about gaming. It's just that most of the exciting technological advances at this year's CES seem to be gaming-related. Take gaming out of CES and what are you left with? Curved Ultra HD TVs, slimmer smartphones, slightly better tablets, more refined Ultrabooks, and concept cars with laser headlights.

Why are Steam Machines such a big deal? Because the concept of an easy-to-use, Windows-free living room PC has the potential to turn home entertainment on its head, to challenge the Xbox One and PS4, and to attract an audience who might once have balked at the cost and complexity of owning a gaming rig. Valve announced 13 Steam Machine partners at CES 2014; its Steam service already has 65 million members. The only question worth asking is: which Steam Machine should you buy?

As TechRadar's very own Gareth Beavis succinctly put it: why has Samsung decided to hide its best iPad competitor under such a rubbish name? We have no idea but we do know that the Samsung Galaxy Tab Pro is a brilliant piece of kit. The new screen, redesigned UI and the power behind it all mean that this is a real contender for tablet of the year. Bearing in mind it's January, that's pretty impressive.

Considering how far technology has developed over the past few years, it's astounding to think that we still protect our smartphones with a basic 4-digit code and safeguard our most important data with a password that we're allowed to choose ourselves. There are safer, higher-tech solutions available. Apple introduced fingerprint recognition to mobiles with the iPhone 5. Eyelock aims to replace insecure passwords with Myris - a device that scans your eye for uncrackable authentication instead.

Back to gaming again, and the annual technology head-turner from Razer is its modular Project Christine PC. Just as Valve's Steam Machines are designed to appeal to non-PC gamers who cower at the prospect of upgrading a graphics card, this unusual tower encases a system's core components (hard drive/SSD, RAM, power supply, graphics card, etc) in non-threatening, pluggable boxes.