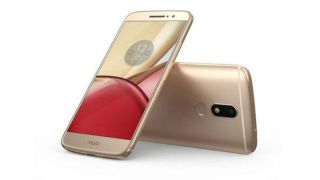 Leaks and rumours about the Moto M have been circulating around the internet for months now and it seems Lenovo has jumped the gun and listed the smartphone on its official website before the official launch.

The Moto M is an exciting smartphone as its a departure from the design language of previous Motorola smartphones. It rocks a full metal unibody design with antenna bands on the top and bottom edges, much like the iPhone 7.

What is different here is that unlike the Moto Z and Moto G4, the  fingerprint sensor isn't located below the screen but at the rear, below  the camera module.

Because of this, the Moto logo has shifted to the bottom of the device, which definitely looks unique.

On the hardware front, the Moto M is a typical mid-range device with a  5.5-inch fullHD display, a MediaTek hello P15 oct-core processor, 4GB  of RAM, 32GB of internal storage and a 3,050mAh battery with fast  charging support. It is not known at the moment whether storage is  expandable via a microSD card.

On the imaging front, the Moto M comes with a 16MP rear camera with  dual-LED flash and phase detection auto-focus. On the front there is an  8MP camera for your selfie needs. The listing also claims that the Moto M  is splash proof, with a double layer nano coating to protect it from  minimal water exposure.

The Price is unknown at the moment but we will know soon enough as the Moto M is expected to be officially launched at an event in China today  alongside the Lenovo P2.