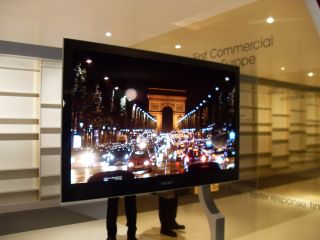 Despite statements to the contrary, rumours are flying out of Asia that Sony will announce a new OLED TV at IFA 2009.

The Korea Times has quoted industry insiders by stating that the electronics behemoth will be among the few companies releasing 'game-changing products'.

It's believed that the next in Sony's OLED TV line, likely to be the XEL-2, will be above 21-inches in size, but the notion of such an announcement would be in sharp opposition to the economic problems facing every large electronics company.

Sony does hold such premium products in high regard, believing that some people will always pay over the odds to have the latest tech, meaning that a price tag of up to £5,000 is not unthinkable.

Plus it will have the added cool factor of being the largest OLED screen commercially available, with the likes of LG only bringing out TVs based on the technology at around 15 inches or so.

Add to that the fact it will be 0.3mm thick / thin at certain points, and you'll have a screen every millionaire / Premier League footballer will be waiting in line (or getting their butler to wait in line) for when it's released like in 2010.

From Korea Times via OLED-info