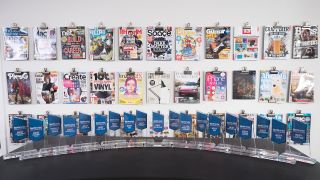 CES 2018 is now well under way, with innovation pouring in from every corner of the Las Vegas strip. From wall-sized TVs to robotic ... well, robotic everything, the brightest minds in consumer tech have descended upon Sin City with some of the hottest gadgetry around.

So, what’s the best tech we found at CES 2018? The TechRadar team has been scouring the Las Vegas Convention Center halls and grabbing front row seats at all the major press conferences to cherry pick the very best that this year’s show had to offer. This is what our expert team of editors have highlighted as CES 2018’s highlights – as well as what you, our dear readers, have picked out as your most-wanted new gear, too.

Watch our video breakdown of all TechRadar's 2018 CES Awards below!

Without further ado, here are the winners of TechRadar's 2018 CES Awards!

Best in Show – The Wall by Samsung

Samsung’s new – and the first-ever – modular MicroLED TV promises to put the current OLED standard in its place. At 146 inches diagonally, The Wall is a TV that engulfs your entire field of view with gorgeous, visually stunning images that rival what we’ve seen on OLED screens. Beyond being a sight for sore eyes, Samsung's MicroLED has real potential to change the way we buy and watch TVs down the road, and therefore the overall best product of CES 2018.

The HTC Vive Pro offers an exceptional upgrade to the original VR hardware in both resolution and audio. Debuting at CES 2018, the Vive Pro has deservedly grabbed the attention of the TechRadar readership, who’ve voted to crown it with this year’s People’s Choice award.

The future of bending screens is nearly here, and none other than LG is blazing that trail. This year, the firm has a concept for a 65-inch, 4K OLED TV that can roll into its base for easy hiding. While there's a big difference between a CES concept and producing the technology at a reasonable cost for store shelves, this prototype stage shows LG will be a leader in folding screen tech going forward. It's something you've just got to see to believe.

Lenovo’s first Snapdragon 835 Windows tablet impresses to the point of us deeming it the best laptop of CES. The Lenovo Miix 630 looks and feels like an incredibly luxurious Windows tablet – that we can call a laptop in that it actually includes the essential accessories – with excellent portability and connectivity options. With up to 20 hours of battery life promised, this will be one to beat in 2018.

Lenovo’s standalone Google Daydream headset looks to be the best way to experience VR content on-the-go, practically eclipsing Google's own Daydream View headset, thanks to a marriage of forward-thinking design and ambitious immersion features. Lenovo Mirage Solo may well be the standalone VR device to aspire to in 2018, and therefore worthy of such praise.

MSI has updated its GE63 Raider line with the coolest applications of RGB lighting we've seen in a gaming device – much less a gaming laptop – ever. When playing supported games, the SteelSeries-powered GameSense software can tell the RGB lights to behave differently and display different information based on in-game events. This could very well be a game-changer for competitive PC gaming in 2018, and enough to earn our award.

LG’s 2018 flagship OLED adds Google Assistant and a high-end processor to make for the best television we've seen on the show floor. While the LG W8 OLED doesn’t rewrite the book on its OLED panels, these huge improvements to software and hardware make this year’s W8 a serious contender in the upcoming battle for ‘best TV of 2018’ and most worthy of this award.

Lenovo's Mirage Camera leads the pack of what are known as VR180 cameras to support Google Daydream headsets with a supply of depth-packed images from content creators like yourself. Lenovo's Mirage camera features dual 13MP cameras with fisheye optics with a field of view covering 180 x 180 degrees, making for the most interesting and unique camera of CES 2018.

Simply put, Nvidia's 65-inch gaming screens are a thing of beauty. These displays, of which Asus, Acer and HP have bespoke products for, offer HDR technology for stronger color reproduction as well as G-Sync for silky smooth frame rates. Will these screens change the way we play PC games? Perhaps, and it's that possibility that's earned Nvidia's displays this CES 2018 award.

LG's take on the smart speaker with Google Assistant inside has audio quality strong enough to rival or perhaps even surpass the Google Home itself. The LG ThinQ works with high-quality lossless files and has Meridian Audio technology built in, which by our measure is the first of its kind and therefore a trailblazer of CES 2018 worthy of this award.

The Forerunner 645 Music brings both music and payments on a Garmin watch, bringing it up to par with rivals like the Apple Watch but with arguably far better fitness chops. Better yet, this watch supports multi-sport modes, cycling and swimming and will last up to 7 days on a charge, making it the best fitness tech of CES 2018 handily.

This coding robot from Root Robotics and Coding & Play looks like a tiny Roomba, but is capable of so much more when in a kid's hands. Designed with three levels of coding functions, the Root introduces kids to coding concepts slowly from four years old onward, eventually allowing older kids to write code directly. A toy that teaches kids a hugely valuable career skill? That's a CES winner in our book.

Exercise without getting caught up in cables is the promise of the Sony WF-SP700N wireless earbuds, and it appears to deliver on that promise in spades. The WF-SP700N is its most feature-packed sports bud yet, with its splash-proofing and active nose-cancellation packed into a true wireless form factor, making them the headphones to beat at CES 2018.

While the people have already spoken, we too are smitten by the HTC Vive Pro. It not only now has a higher resolution, dual-OLED display, but the inclusion of the headphones help bring the Vive’s audio in line with – and in some ways even surpasses – competitors. So far, the Pro is shaping up to be the upgrade the Vive needs to usher in the next phase of VR in 2018.

Having already earned our Best in Show award, there isn't much more to say about The Wall by Samsung. However, know that The Wall hasn't won simply because it's a huge TV, but for its implications on the future of TV writ large – that alone is worthy of not one, but two CES awards.

Vivo, a Chinese smartphone, will be the first ever to include an in-screen fingerprint reader designed in partnership with Synaptics. The new technology works surprisingly well and naturally, making it poised to be one of the most popular new features of smartphones in the years to come. This is the phone innovation we've been waiting for, and therefore worthy of such an award.

Sony's latest Dolby Atmos soundbar, the Sony HT-Z9F, brings 4K HDR compatibility to a 3.1 channel system with surround sound through either Dolby Atmos or DTS:X. This is one audio accessory that would seriously upgrade your home theater, and therefore earns this coveted award.

Ladies and gentlemen, meet the very first smartphone gimbal that can support portrait orientation image and video capture: the DJI Osmo 2. For those that want to make their Instagram Stories that much better, this is the mobile accessory to beat at CES.

Samsung has done it again when it comes to smart home technology with the Samsung Family Hub. This is the firm's smartest fridge yet, now serving as a SmartThings IoT hub for your home as well as a new home for Bixby, Samsung's digital assistant. For being a one-stop shop to start a smart home, the Samsung Family Hub handily earns this award.

Built by Ryze Tech in China, this $99/£99 drone features both Intel and DJI technology inside, bringing the wonder of drone flight to even more people than ever. For being the most accessible drone to date with leading tech inside, Tello earns this year's CES award.

Sony's latest Bluetooth speaker, the Sony SRS-XB41, is poised to be the best speaker for parties to date, bringing both its own light show as well as improved bass. For that, we deem it the best speaker of CES 2018.

The Sony Aibo employs some of the most intelligent, thoughtful uses of robotics, sensors and AI to date, mimicking the experience of training and raising a puppy. For such a charming and nuanced simulation of a real canine that won't cost much more than some purebred dogs when it releases, Aibo is the best robot of CES 2018.

As Vuzix's next earnest step into consumer-grade augmented reality, the Vuzix Blade glasses will undoubtedly blaze the trail toward logcial, approachable AR for everyone, with Amazon's Alexa digital assistant steering the wheel. It's easily the best AR on show at CES 2018.

While we've already seen Apple promise wireless charging of multiple devices on a single pad, it appears that Belkin has handily beat Apple to the punch with a product we can see. For the ability to charge two devices at once wirelessly, Belkin wins this award easily.

Mophie's PowerStation AC may be pricey, but it's bound to be the only mobile charger you'll ever need. With a 22,000 mAh battery inside, this charger can deliver power to everything from your laptop (up to 90W) to your phone. For that, it easily earns this CES award.