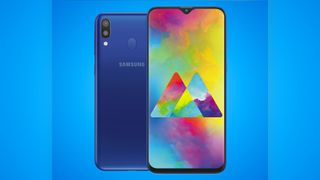 Samsung has announced the M-series in India on Monday. The India first series comes with Galaxy M10 and Galaxy M20 smartphones. The South-Korean giant has a newfound love for the millennials of India which is why the company has dedicated these phones to them.

Both the Galaxy M10 and M20 are entry-to-mid range phones and the price starts at Rs 7,990. Interestingly, Samsung M-series features phones that have a waterdrop-inspired notch on the front which is a first for the company.

Samsung Galaxy M10 is the most affordable out of the two phones and features a 6.2-inch HD+ infinity-v display. The infinity-v display is essentially Samsung's take on the waterdrop notch which allows it to provide an overall larger screen-estate to the users. The Galaxy M10 is powered by Exynos 7870 chipset and an octa-core chipset.

The Galaxy M10 has a dual camera setup on the back which consists of a 13MP primary and a 5MP ultra-wide sensor. On the front, there's a 5MP camera with f/2.- aperture. The phone also supports face unlock via the front-facing camera. The Galaxy M10 is powered by a 3,400 mAh battery.

The elder sibling, Galaxy M20 is a maxed out version of the M10 while keeping the same design and built. The Galaxy M20 features a 6.3-inch Full HD+ display and runs on Exynos 7904 chipset. It has the same dual-camera setup as on the Galaxy M10 on the rear while the front camera has been bumped up to accommodate an 8MP (f/2.0) sensor. The Galaxy M20 is powered by a huge 5,000mAh battery that supports fast charge. It comes with a 15W fast charger that's bundled in the box.

Samsung's newly launched Galaxy M10 and Galaxy M20 will be available on Amazon India and Samsung India Store from February 5.

As part of a launch offer by Jio, buyers of new Galaxy M20 and Galaxy M10 phones would be entitled to double-data offer on Jio 4G.