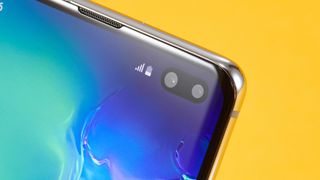 The S10 Plus, pictured, has a punch-hole in the top right corner, but that might change for the S11 (Image credit: Future)

Samsung could be planning a design change for the Samsung Galaxy S11, but not to something completely new, rather, it might look more like the Samsung Galaxy Note 10, with the punch-hole selfie camera being moved from the top right edge to the top center.

That’s according to @UniverseIce (a reliable leaker), who added that the punch-hole on the Galaxy S11 will be smaller than it is on the Galaxy Note 10.

The leaker even went so far as to create a render of how the Samsung Galaxy S11 might look, based on leaked information. You can see this below, but again, this isn’t an official render, so don’t take it too seriously.

This is the Galaxy S11 rendering I made, based on the leaked information, don't take it seriously, it's just my imaginary. pic.twitter.com/CunwipElFPNovember 11, 2019

We haven’t heard this claim of a central punch-hole before, so we’d take it with a pinch of salt, but it doesn’t seem unrealistic.

It’s a change that could also support the rumor that Samsung is merging the Galaxy Note and Galaxy S lines and rolling the key features of the two phones into one handset. If Samsung were to do that then it wouldn’t need to worry about this design looking too similar to the next Note, because there wouldn’t be one.

We still think it’s unlikely Samsung will drop down to just one flagship range, at least in 2020, but it’s possible. Whatever Samsung’s plans are for the Galaxy S11, we should hear plenty more about them soon, as the phone is likely to launch in February and we’ll probably hear lots of leaks ahead of that.