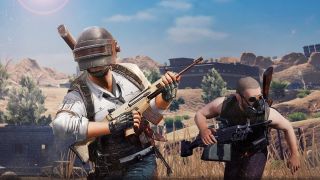 PUBG Mobile is giving its players a chance to win classic PUBG merchandise. All you have to do is win using an AWM sniper rifle in a normal/classic match, take a screenshot and post it on Twitter with the hashtags #pubgmobileawm and #pubgmobilechallenge. The ongoing challenge will end on November 22, so don’t plan on taking your sweet time.

The tweet does not specify if the merchandise will be an in-game prize or a physical item, but the contest announcement does show dog tags, so that might be one of the prizes. Also, there's no information about the number of participants eligible to win the merchandise.

We have all these #pubgmobilemerch…so yeah let’s do a #pubgmobilechallenge! To participate, win using an AWM Sniper in a normal/Classic match (not Arcade). Post your screenshot showing your AWM win with the hashtag #pubgmobileawm & #pubgmobilechallenge. Challenge ends on Nov 22. pic.twitter.com/T1uoGWuz4FNovember 15, 2018

Recently, PUBG Mobile also announced that the global finale of its PUBG Mobile Star Challenge will take place at the Festival Arena Dubai, from November 29 to December 1. The total prize pool of the challenge is $600,000 (approx.. Rs. 4,35,75,000) and allows players to compete in teams of four. But the competition is only open to players who have at least 1000 followers on YouTube Gaming, Twitch, Facebook Live, Smashcast TV, Mixer, and other platforms. One player on each team must fill this criteria.

PUBG Mobile has become a global phenomenon soon after its release. It crossed 100 million downloads in August this year and has been nominated for the 2018 ‘Fan Favourite Game Award’ on the Google Play Store.