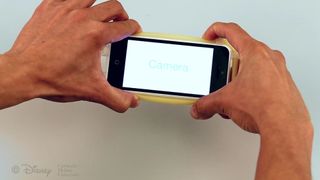 Researchers at Disney and Carnegie Mellon University have invented a new type of accessory - for your phone and other gadgets - they call "Acoustruments."

Their official definition reads like a lawyer wrote it: "low-cost, passive, and powerless mechanisms, made from plastic, that can bring rich, tangible functionality to handheld devices."

Translation? Acoustruments turn your touch and grip gestures into sound waves that phones, toys and more devices can interpret.

The "smart case" the researchers demonstrate in the video below shows a lightweight plastic piping that extends from an iPhone's speaker, around its edges, and back to its microphone.

Touching the plastic railing alters the ultrasonic signals being sent from the speaker to the mic, alerting the phone to new variables its sensors can't pick up natively - like when you're gripping it with one hand or holding it up to take a photo.

In other examples the accessory extends outward from the phone's bottom, making room for new external buttons.

It's a cool idea, and the researchers also showed it being implemented in toy cars, dolls and alarm clocks. The obvious (and even cooler) idea is to implement this functionality directly into a phone's chassis to enable a whole new range of controls.

There's no guarantee that will ever happen, but it's a neat idea nonetheless.