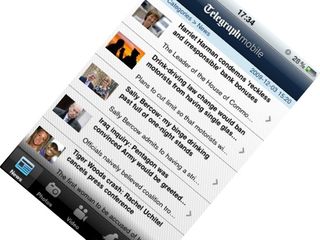 The Telegraph Media Group has launched what it terms an 'updated and enhanced' version of its iPhone app, promising offline functionality and faster downloads.

The offline functionality is the key thing here – allowing you to read articles when you have no signal, and potentially making the commutes and air journeys a little more palatable.

There are also features like local news based on your GPS location, film trailers and more video generally.

Last and definitely least, there is the 'Report' which allows you to be a citizen journalist and blah blah blah – you get the idea.

Maani Safa, Head of Mobile, TMG, said: "At TMG we are committed to innovation and development so we are really excited to be launching the second version of our application, which is practical, easier to use, faster and provides more options for the user.

"We've listened to our users' feedback and incorporated many new elements to the application that will simplify and improve usability, including the capacity to share news and read offline."

Note that there's no mention of the users asking to be citizen journalists.

The new version will be initially available on iPhone but will make the jump to Blackberry, Android, and other mobile app stores 'in the coming months'.