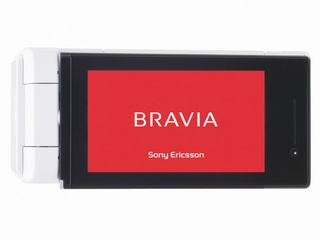 Sony Ericsson is hoping to repeat the success of its Walkman phones in Europe, by launching a range of Bravia and PlayStation (PSP) branded mobiles - or so rumours suggest.

The idea certainly has form. Bravia-branded phones have been available to buy from Japanese network NTT DoCoMo since last year.

The current model - the FOMA-branded SO903iTV - comes with a built-in DVB-H digital TV tuner, 3-inch widescreen display and a 2-megapixel camera. Not surprisingly, speculation is rife that Bravia phones will drop here too - something that hasn't wholly been denied by the company.

We asked Sony Ericsson UK if we'll see the Bravia mobile phone in the UK at all. "Not within the next nine months," a spokesperson told us. "It's a little bit premature as mobile TV has yet to take off in this country."

Notice the very specific "not within the next nine months" comment. Makes you think, doesn't it?

Meanwhile, Mad 4 Mobile Phones reports that Sony Ericsson is also eyeing up the PlayStation Portable (PSP) as its next brand extension. Such a move would be logical, given the growing the popularity of mobile gaming. it would also give Sony Ericsson the chance to directly challenge reborn Nokia's N-Gage gaming platform.