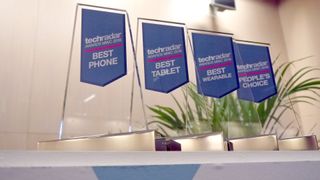 The techradar MWC Awards, a now-staple of the Barcelona show, have seen fierce competition for a number of titles at this year's event.

With Best Wearable, Reader's Choice, Best Tablet, Best Wearable and Best in Show all up for grabs, all the top tech firms present in Spain this year were vying for the chance to be crowned the best with their new offerings.

Alongside our crack team of techradar judges, spending hours deliberating over the best tech on show, our Reader's Choice poll gave you the chance to cast your vote too, making sure we got to award the device that garnered the most interest.

LG's take on VR was a slightly different one to the usual big, bulky headsets: it's a slimline device that's designed to be more portable than something like Samsung's Gear VR.

It's chosen portability over high-spec, but the judges felt that it offered something innovative and alternative to the slew of wearable gadgets out on the market/

This 'hearable' impressed with it's ability to bring voice-controlled commands to daily life - we're looking forward to seeing it move closer to reality.

Huawei's shaken off its budget stigma with the MateBook, producing a highly appealing tablet hybrid which will surely give the iPad Pro and Microsoft Surface Pro 4 a run for their money.

There's plenty to like here, with a sleek body that feels it's worth the higher price tag it commands.

The Galaxy S7 Edge has proved popular this year, with its slick design and power garnering a huge amount of attention.

A double award for Huawei, with the Matebook taking the Best Tablet award, bridging the gap between the iPad Pro and Surface Pro 4 nicely to be crowned our top slate this year.

It's a tablet with a projector - what more do you need to know? It's chunky but... it's got a projector inside!

Unsurprisingly, this is a phone that grabbed a huge amount of attention and was a popular choice from our judges, who loved the feel of the polished and curved rear combined with a robust waterproof frame and sublime looks.

A close run thing, but the LG G5 has got a lot of people talking thanks to its innovative modular design and dual camera set up.

It's a double win for Samsung, which tops the charts with three gongs this year. The S7 Edge is a real step forward over last year's model, with a hugely improved battery and upgraded camera sure to mean this isn't the last award it'll pick up in 2016.

It's easy to see why the G5 is here, but the Rolling Bot from LG needs a special mention. Not only was it never supposed to be released, it's gained a lot of attention because it's fun, crazy and silly, with one judge even calling it 'addictive'.