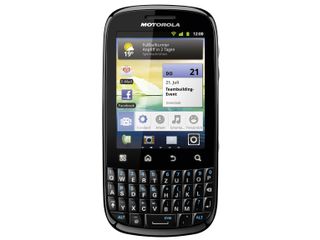 Motorola has finally made the Motorola Fire official, giving the QWERTY-toting handset a UK release date of late September.

Yes, that's the same handset we pontificated on earlier this month, with the same UK release date that we reported from an online retailer.

Unfortunately, the 1GHz processor that was suggested by Clove hasn't come to pass; the Fire gets only 600 MHz for its trouble.

Still, now it's all nice and official with Motorola promising "colour, fun and functionality" all coming bundled with the handset.

As for actual specs, the Motorola Fire features a 2.8-inch QVGA touchscreen sitting above the physical QWERTY keyboard in a power-bar form factor, and is not the pure-touch device that was first revealed under the Fire monicker.

We can now confirm the fact that it comes with a 3MP camera, Android 2.3, Wi-Fi and an FM radio, while the 1420mAh battery promises eight hours of talk time.

To find out how accurate that is, keep your eyes peeled for our official in-depth Motorola Fire review.

Meanwhile, our smartphone buyer's guide should give you an idea of whether or not you should hold out for the Fire or opt for a higher-end handset that's already doing the rounds: