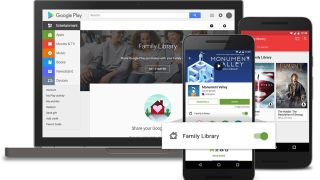 Tired of handing out your email and password every time someone wants to watch a movie or read a book on your Google Play account? Starting today, you won't have to worry about that any longer.

Google is making is easier for anyone in your family - or even those you just consider family - to access purchase on Google Play from one account thanks to Family Library.

Google Play Family Library allows up to six people to share a single account, giving each member access to every eligible app, game, movie, TV show, and book added to your communal collection. It's an expansion of the sharing options already introduced in the Google Play Music family plan, which Google launched last December.

Users don't have to pay extra for the service, and only need to fork over the dough for the items they purchase. Everything is available on any Android devices, while movies, TV shows and books are accessible on iOS and the web, too.

While you'll have to keep a credit card on file for the Family Library account, anyone can make a purchase using their own personal credit cards or gift cards. If you're feeling less than friendly with your family members at any given time, you can also choose what you want to share with them, and what you'd like to keep to yourself.

You can also keep a check on what the kiddos see by approving their purchases, just in case they're not ready to graduate from Phineas and Ferb to Mad Max: Fury Road.

Google may be calling it the Family Library, but it's unclear how it will stop you from welcoming a partner, roomie, or neighbor into your account.

If it's anything like Google Play Music's paid family package - a separate service that allows up to six people to share Google's music streaming platform for $14.99/£14.99 a month - adding 'family' members only requires a phone number or email. In other words, if you trust someone, there's nothing stopping you from making them one of your Family Library members.

Apple's iCloud Family Sharing is virtually identical, allowing users on Android's chief competition to combine purchases across the App Store, iBooks, and iTunes without having to split an Apple ID. Even the family size of six is the same.

This extends to Apple Music, with its own family plan for $14.99/£14.99 a month, equivalent to Google Play Music's offer. Spotify also offers its own six-member group plan for the same price.

Despite playing a bit of catch-up with its expansion, Google Play Family Library gives a vast number of smartphone, tablet, and other Android-powered devices a big boost and fewer redundant purchases - a boon if you live in an especially Google-devout family.

Google Play Family Library is rolling out over the next 48 hours, so you may not see it available where you live just yet. It's available in Australia, Brazil, Canada, France, Germany, Ireland, Italy, Japan, Mexico, New Zealand, the United Kingdom and the United States. To sign up, just head over to Google Play and start sending out invites.