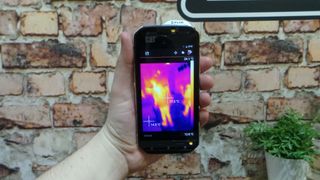 A thermal camera on the back of your smartphone might not feel like a technological breakthrough, but it could literally save somebody's life.

Sure, it'll be fun to use for more trivial purposes, like seeing who has the coldest beer or the hottest hands, but the CAT S60 isn't aimed at the general smartphone user; it's for plumbers, builders, electricians and manual labourers who will find the addition of a thermal camera genuinely useful.

But there's another group of people in society a phone like this could help: the emergency services.

Some fire engines in the UK are now all installed with thermal cameras, but as the technology is so expensive it's usually restricted to one per a vehicle. If the technology was available to every fire fighter, in their pocket, the implications could be huge.

The process of going into a burning building to find a child that could be hiding anywhere is terrifying, but being able to use a durable smartphone with a thermal camera to track them down could well be the difference between life and death.

When trying out the S60, I was able to hold it up and watch the heat signatures of people walking by. You can put a crosshead onto different areas of the image to work out the hottest and coldest spots too.

The camera tech comes from a company named FLIR and the sensor on the back of the S60 can pick up heat - and measure surface temperatures - from a distance of 50 feet (and possibly more, suggests CAT).

Not only can it see through smoke, but the phone is also waterproof up to five meters. This is a durable phone that is perfect for those who need something a little tougher.

The design isn't beautiful – this is a rugged device after all - but the spec is good with a 4.7-inch HD display, Qualcomm Snapdragon 617 processor, 3GB of RAM, Marshmallow software, 3,800mAh battery and 32GB of internal storage.

There's plenty of potential in how a phone like this could be used. A police officer turning up to an abandoned car could quickly see if the driving seat is still warm.

Putting this previously-hard-to-get-hold-of technology onto a phone makes it accessible for people in these industries. The phone still costs US$599 (about £430, AU$836) but it's a small price for having this technology in such an accessible form.

The CAT S60 isn't the best looking smartphone but it is durable and, unlike most of the rest of phones that appeared at MWC 2016, innovative.

Considering thermal camera technology wasn't easily available to the emergency services pre-2001, fitting it into a phone is a big step for a small manufacturer.

While the feature doesn't have the glamour of anything Samsung and Apple might roll out on their next smartphones, this is certainly going to change some industries that really need this kind of technology, and bring a power to those who help others.