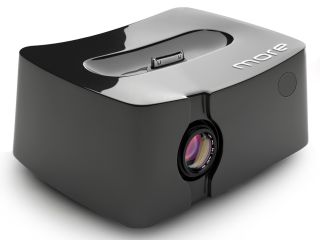 The new projector you didn't know you wanted

Apple announces a new product and the world’s peripheral manufacturers wet their collective pants and start dreaming up every device they can think of. As inevitable as death and taxes.

So that’s why we’re not surprised by the new Honlai Qingbar MP101, a pico-projector with an iPhone dock built right in.

In fairness, it also has inputs for any device, but the dock is a clue to the one it wants to be feeding video from the most.

Light in the dark

The projector isn’t the best: it throws out a 4:3 image and has a contrast ration of only 200:1, with VGA resolution output.

Also, 10-15 lumen brightness is only going to be visible if you use it on a white background. In a nuclear bunker. At night. Under a sheet.

But still, what better way to show off your favourite iPhone videos you’ve recorded from another source (remember, still no video capabilities on the Apple device…did you overlook that?)