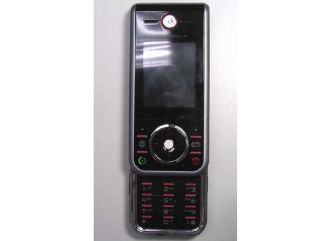 We love the FCC for two reasons: 1. It doesn’t have any regulatory powers in the UK. 2. It keeps letting us know about new phones.

Motorola has obviously developed a new mid-range slider, and submitted it to the FCC for approval, so we bring it to you here.

Motorola, or as they are known in the industry The ‘we built the Razr and forgot to make any other phones’ have returned with another decent music mobile.

My teeth are blue!

It has all the necessary bells and whistles for music playback, namely a microSD slot and A2DP stereo support (so Motorola can sell more proprietary headphones), as well as FM radio and Bluetooth 2.0.

Unfortunately, it looks like it’s only going to be available in the US, and has a 2MP camera. The menu also contains reference to a Google app called ‘Pointer’, which we can only assume links to the search site.

Oh well, good to see Motorola is still spitting out the handsets once in a while.