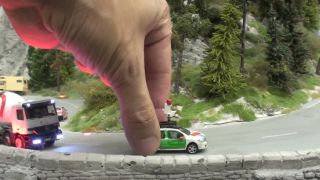 Google Street View, the technology that offers panoramic views of roads (and some other neat spots) from all around the world, has been scaled down to capture pictures of the world's largest model railway, Hamburg's Miniatur Wunderland.

It's not a place we've been dying to visit, but the results are definitely worth a look - especially when you consider Miniatur Wunderland contains 13,000 kilometers of tiny rail track and replicates a few of the world's biggest landmarks.

The project came about thanks to a partnership between Google and Ubilabs. The two worked together to make tiny cameras that were mounted to the trains and to some tiny road vehicles.

More than 200,000 miniature citizens inhabit Miniatur Wunderland, which features a scaled-down Grand Canyon, a miniature Las Vegas, and even a micro replica of Bavaria's Oktoverfest.

The video below shows how it was all put together, and you can go see it all for yourself here.