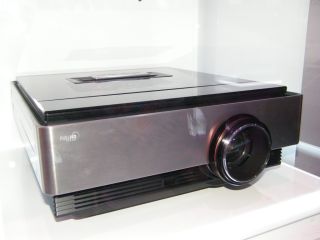 It's a big beast, but LG's 3D projector should be mighty impressive

LG caused a little stir when it outed a Full 1080p HD 3D projector at its press conference yesterday. Sadly the CF3D isn't exactly going to be readily available – it's expected that it will cost $10,000 when it goes on sale in the States later this year.

The projector is the only 3D projector in the world to produce a single image rather than separate images for left and right.

We took these quick snaps of the CF3D, though it was sadly stuck behind glass. But we can tell you that it's absolutely massive while LG had a working model in a room next-door. The unit uses LG's Dual Engine 3D Processor. It also uses LG's TruMotion 120Hz technology.

As you'd expect, the specs are fully competent – 2,500 lumens of brightness and 7,000:1 contrast. There are also three HDMI ports.