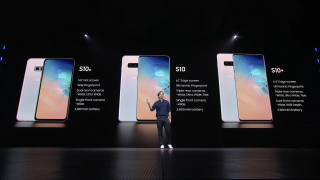 Samsung has kicked off its 2019 in a big way, as the company has just announced a wealth of new devices.

Headlined by the Samsung Galaxy S10 range, the launch also included other phones and wearables too.

If you missed the livestream though, don't worry, because you’ll find all the information below about everything announced.

We’ve been at the event getting hands-on with everything we can, so once you’re done here make sure to check out our hands-on reviews, versus articles and other coverage.

The Samsung Galaxy S10 is undoubtedly the headline announcement, and was the most highly-anticipated.

Samsung’s newest flagship has a lot of impressive specs, from its 6.1-inch QHD+ Dynamic AMOLED curved screen, to its triple-lens rear camera, made up of a 16MP f/2.2 ultra-wide lens, a 12MP f/2.4 telephoto lens and a 12MP lens that can switch between f/1.5 and f/2.4 apertures.

The Galaxy S10 also has a refreshed design, with a punch-hole in the screen for the 10MP front-facing camera. The world's first ultrasonic fingerprint scanner is also built into the display, so bezels are kept to a minimum.

Alongside the Galaxy S10, Samsung has also announced the larger Samsung Galaxy S10 Plus. This has a curved 6.4-inch QHD+ AMOLED screen, but the screen size isn’t the only difference.

This phone also has a second camera on the front, with an 8MP snapper joining the 10MP one. Its battery is a lot bigger too, coming in at 4,100mAh, and you can get it with up to 12GB of RAM and 1TB of storage.

The need to add in a second front-facing camera has led to a slightly different design, with more of a pill shaped cut-out in the screen, but otherwise the Samsung Galaxy S10 Plus has the same look and specs as the standard model.

This included a triple-lens rear camera and an in-screen fingerprint scanner. It starts at $999 / £899 (roughly AU$1,640), so if you're after one of these phones then you'll need to get saving quickly. Unless you're filthy rich, then maybe buy 10 just to demonstrate your wealth.

If you gawped at the price of the Galaxy S10 and Galaxy S10 Plus, then you might be more interested in the Samsung Galaxy S10e, a phone which aims to capture the essence of its siblings at a lower price.

It has a 5.8-inch Full HD+ AMOLED screen that’s flat rather than curved, but sports an otherwise similar design, complete with a punch-hole selfie camera.

There are two rather than three cameras on the back though, namely a 16MP f/2.2 ultra-wide one and a 12MP variable aperture one – so it lacks the 12MP telephoto lens of its siblings.

This is the most premium of the Samsung Galaxy S10 models and, as you’ve probably guessed from the name, it supports 5G.

That aside, other highlights of the Samsung Galaxy S10 5G include an enormous 6.7-inch screen, a 4,500mAh battery and four rear cameras, consisting of the same three as the main S10 range.

On top of that there's also a 3D depth-sensing camera, useful for augmented and virtual reality, as well as facial recognition.

There’s also a 3D depth-sensing camera on the front, alongside a normal 10MP snapper. That combination means it has a bigger camera cut-out than the rest of the range.

The Galaxy S10 5G also has 8GB of RAM, 256GB of storage and a microSD card slot. So it doesn’t have as much RAM as the S10 Plus can potentially come with, but that aside it’s essentially a bigger and seemingly even better version of that phone.

It won't be launched until later in the year though, when the networks start rolling out their 5G signal across the globe.

The Samsung Galaxy Fold is even more ambitious than the Galaxy S10 range, seeing as how it’s the company’s first foldable phone.

It has a 4.6-inch screen when folded and can open out to a 7.3-inch display, big enough to allow for three-app multitasking, and app continuity allows you to instantly pick up where you left off when switching between screens.

So it fills the role of both a phone and a tablet, and there’s no shortage of power, with a top-end chipset and 12GB of RAM.

The Galaxy Fold also has six cameras – three on the back, two on the inside and one on the front. There’s 512GB of storage, a 4,380mAh battery to keep it going, and optionally 5G support.

It’s the first big-name device in a new smartphone category, but exciting as the Galaxy Fold is it has a prohibitive price, starting at $1,980 / €2,000 (with UK and Australian pricing and availability yet to be confirmed).

That’s the phones out the way, but handsets aren't all Samsung has unveiled, as we’ve also seen the Samsung Galaxy Watch Active.

It’s essentially a sportier alternative to the Samsung Galaxy Watch, and it has a round face, a heart rate monitor (that can also measure your stress), and water-resistance to depths of 50 meters. It can also track sleep and it’s made from a lightweight form of aluminum, so the watch won’t weigh you down like others from Samsung in the past.

It runs Tizen but with a bit of a makeover, as it includes Samsung’s new One UI, which hasn’t been used on a wearable before. It’s more than just a fitness band too, as it can also access apps and receive smartphone notifications.

That said, we're not really sure how much of an upgrade it is - check out more in our in-depth look below (linked below).

If all you actually need is a fitness band then the Samsung Galaxy Fit or Galaxy Fit E will probably be more your speed.

The Galaxy Fit is a basic tracker that’s incredibly light at just 24g and it can track your heart rate and steps. It’s also water-proof to 50 meters.

The Galaxy Fit can automatically track six different exercises and you can track sleep and stress with it too, with a rectangular Super AMOLED screen being your window onto all of that. Supposedly its battery will last around a week as well, so you won’t be charging it all the time.

The Samsung Galaxy Fit E is smaller, lighter (just 15g) and generally lower end, but with many of the same features, including a heart rate monitor and 50-meter water resistance... and rumored to have a much lower price as Samsung finally brings out a budget wearable.

Last but not least, Samsung has also announced the Samsung Galaxy Buds. These are wireless earbuds that are seemingly set to compete with the likes of the Apple AirPods.

They come with a case which can charge them (and which itself can be charged with or without wires).

The Buds themselves supposedly last for 6 hours of music or 5 hours of calls between charges, you can access Samsung’s AI Assistant Bixby through them, and they cost $149 / £139 (around AU$210).