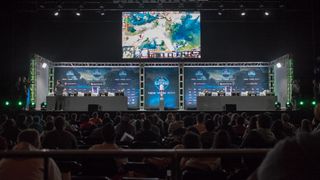 Jakiro the two-headed dragon catches the Crystal Maiden in an ice stream before the wyvern spits out a burst of liquid fire. The burning phlegm connects, melting the maiden instantly as her allies come to avenge her slaying the dragon. But it's too late; the Evil Geniuses have already breached the Alliance's defenses.

EG's Death Prophet storms the enemy keep with a platoon of minions and a swarm of spirits. Together they whittle down the Dire's Ancient remaining health to a tiny sliver, bringing them one attack away from victory. In the ensuing madness, the ghostly keeper dies in a four versus one fight with Alliance, but Visage's familiars manage to slip through and deliver the final blow.

The match ends as the crowd chants USA. A roar of excitement from 5,000 seats fills the theater at Madison Square Garden. This is pure unadulterated madness.

Madison Square Garden is famous for being the home of the New York Knicks basketball team, boxing matches and circus performances. Recently the Electronics Sports League, or ESL, has decided to host its first Dota 2 tournament on the east coast at this iconic New York venue. While the theater might have only held 5,000 audience members, there were also (as of this writing) 10,750,707 viewers watching the event live over Twitch.

In the grand scheme of eSports events, these are actually paltry numbers. The International 4 Dota competition held at Seattle's Key Arena in July brought an audience of 10,000 people from locales around the world including Sweden, Berlin and Beijing. And that's not counting the 20 million people who tuned in through Twitch.

eSports is a phenomenon quickly becoming the most popular pastime of the 21st century. Once shunned by venues because no one thought people would pay to see nerds play around with keyboard and mice, eSports has started bringing in bigger audiences than more well funded events like football and baseball.

More than a game

Similarly there's more to being a professional gamer than lightening reflexes. It also requires good communication, teamwork and strategy. For this reason Evil Geniuses manager Charlie Yang shared that every team member spends three to six hours a day training in team practice during the regular season. On top of this, players will spend another three to six hours honing their own skills in individual training. Being a professional gamer already sounds like a full time job but EG's team members also host their own gaming streaming to further supplement their income.

Similarly there's more than meets the eye when watching the best gamers duke it out online. Turning eSports into into an event that engrosses the audience is an art. While it's easy to see the play or field in video games, Twitch COO Kevin Lin highlighted that "it also requires good spectator tools that allow you to move the camera independently and pull up stats to understand what's going on in the game."

"There's [also] professional commentators which helps the hardcore enthusiasts appreciate the deep level of strategy that's happening in these games," Lin said. "It also helps newcomers get a grasp of what's going on."

Next Page Not just a fad
See more Web news