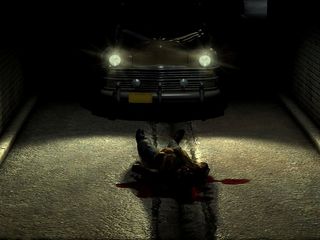 Showing off your latest facial scanning technique and claiming victory over the uncanny valley problem is one thing, but RockStar is so confident in its latest tech strides and that it can bring a little humanity to its avatars that LA Noire's success is riding on the outcome.

TechRadar was shown an entire case from the 1940s LA-set game made by Team Bondi and published by RockStar – a genre-busting detective mystery thriller.

The slavishly recreated LA environment, the hard-boiled characters and the grimy plots are straight out of the writings of Raymond Chandler and James Ellroy.

The principle of the genre-busting game is intriguing even on paper. Rather than simply make Red Dead Redemption with less cowboys and more detectives, or add a retro feel to Grand Theft Auto, Team Bondi has attempted to make a nuanced detective story set in an intriguing and violent period of history.

Nuanced is all very well, but when many of the key moments in the gameplay revolve around being able to connect with, and often read, characters that you meet along the way, you need to make some major strides on from the now familiar and still eerie avatars found in most modern games.

To that end, the game uses MotionScan – a new technology that allows actors every twitch, pout and flinch to be recorded and scanned in, bringing much more accurate facial movements.

The upshot of this technique is that it makes characters much more real, allowing us to read emotions such as guilt, anger and frustration without the need for the feelings to be telegraphed with overly theatrical facial movements.

Next Page Why MotionScan HAS to work
See more Gaming news