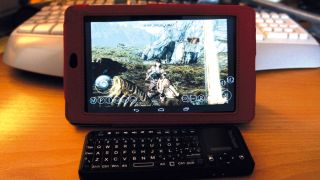 Why wait for Nvidia to get its act together? Make your own Project Shield right now

You can use Windows Remote Desktop Protocol to connect to any Windows system remotely, using pretty much any device. However, although Windows RDP is fast in terms of windows refresh, it's not optimised in any way for gaming or video.

If you play a full-screen video you'll get a frame or two a second at best - nowhere near the 30fps you'd want for enjoyable viewing, and gaming is out of the question. Once more, technology has come to the rescue.

A long-standing app called Splashtop, which is available for Android, Apple iOS and WebOS mobile devices, enables remote high-speed, low-latency sharing on Windows, Mac or Linux desktops. The downside is that it achieves this through a more CPU-intensive high-quality encoding system than RDP.

That said, the CPU overhead isn't too significant - around 9-15 per cent for a second-gen Intel Core i5. If you're running something more sluggish like an AMD Athlon II 1.5GHz, it's more like 30 per cent.

Splashtop is also different to Windows RDP in that it runs on top of the current logged-in user account, whereas RDP requires a specific user account to log in. It might seem an odd differentiation to make, but it has security implications.

Take a tablet, a network and a PC, then get connected

You'll also need to install the Splashtop desktop streamer on any system you want to access remotely. It's available from www.splashtop.com, and supports all versions of the mobile app. Splashtop 2 users will need to create an account for general use. This is also used for billing and remote logging access.

Splashtop's Desktop Security tab offers a number of useful tools. The security code is aimed at older versions when connecting locally or remotely over the internet. You can force newer versions to use this, or to request your Windows account password. The Lock and Blank options are useful for securing the remote PC during use.

If Splashtop is running on your desktop, the app will display systems ready for connection. Desktops that are greyed out are ones you've used before, but are currently unavailable. Tap the far-right end of a desktop entry to see a list of resolutions. We recommend 'Best fit', or a device-native resolution such as 1,280 x 800 for the Nexus 7.

For Nvidia Tegra devices, Splashtop THD comes with predefined controls for Skyrim, Diablo III, Portal 2, WoW, PES and Civ V. You can use these presets with other games, too. The main limitation is that games have to be played in window mode. It's best to put the taskbar onto autohide and tweak the positioning of the game window.

A three-finger-tap opens the gaming controls. You can also tap the '+' button to move and adjust the default on-screen controls. The pad icon switches back to the standard trackpad control system. Wired and Bluetooth controllers are supported via Android ICS gamepad support, with a few key-binding adjustments on the PC end.

As Splashtop 2 requires a subscription for internet access, you might want to buy Splashtop THD instead. The older versions use your Google account to link through to your desktop, while Splashtop 2 uses its own account system. If your router's UPnP isn't playing nicely, forward port 6783 to the system's IP address.