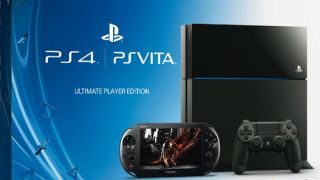 This bundle looks slightly different from those we've seen before

The PS4/PS Vita "Ultimate Player Edition" has appeared on Amazon France, as spotted by Kotaku.

That price will likely change if this bundle is real and if it ventures to the US or UK.

This is not the first PS4/PS Vita bundle to appear, but it does appear to be slightly different from the "Ultimate Edition" package that didn't come out in the UK in December 2013.

That bundle reportedly sold for up to £500 ($840, AU$900), though if it ever actually went on sale it doesn't appear to be available any longer - a search on Amazon.co.uk comes up empty.

We've asked Sony to clarify whether this alleged French bundle is the same as that one and whether the bundle that was discussed last year ever actually went on sale. We'll update here if we hear anything back.

In any case bundling the two consoles together makes a silly amount of sense, especially now that Remote Play between them has really taken off. And Infamous: Second Son is featured right on the box, though It's unclear whether this bundle includes any games.

Perhaps we'll hear something about a PS4/PS Vita bundle during E3 2014, now only days away.