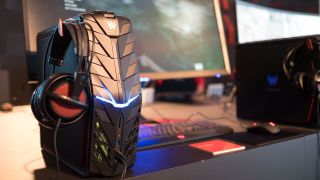 Acer already impressed us with the micro-sized Predator G1 gaming desktop it announced back in April and now it packs even more power.

To commemorate the new configuration, Acer is also rolling out a limited edition Predator G1 that features an Nvidia GTX 1080 alongside an Intel Core i7-6700 processor, 32GB of DDR4 RAM plus a 512GB SSD and 2TB 7200 RPM hard drive.

The configuration comes as a Newegg and Acer exclusive for $2,299 and the gaming desktop comes bundled with a DVD copy of The Division as well as an Acer-branded wheeled carrying case. We've got the desktop in the lab and stay tuned to our full review coming shortly.