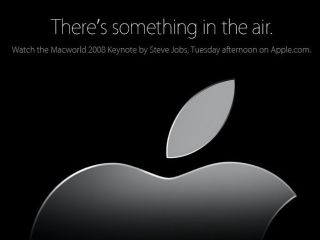 As is usual before a Steve Jobs keynote, the web is rife with scurrilous rumours. The potential for an Apple sub-notebook has been underlined with a name - the MacBook Air - derived from Apple's teaser for the keynote. And now specs have surfaced via a

Never ones to miss a trick, an enterprising member of the Mac community has set up MacBookAir.com to report on the new ultraportable that may, or may not, be unveiled during the 17.00 GMT keynote.

The specs quoted on the page suggest a 2.8GHz Intel Core 2 Duo processor and 1GB 667MHz DDR2. So far so powerful. But then it's on to hard drives. And it seems the screenshot of the webpage has a surprise in store - a solid state hard drive in 60 or 80GB capacities. This is where we think the story falls apart slightly, since SSDs are still rather costly.

Mind you, if Apple has guaranteed to order cartfuls for SSD iPods too, then it could be conceivable. Elsewhere it's suggested that the new notebook will retain the MacBook's 13.3-inch screen size and will not have an optical drive in-box - instead it will be external.

However, we think it more likely that if a MacBook Air is to be launched, it will have a smaller screen size. And the rumours are further undermined by the picture on the leaked webpage. It looks just like a MacBook to us.

The 'Air' moniker is equally likely to refer to new features for the iPhone and iPod touch, such as an iTunes movie download store and even Mac or PC wireless music synchronisation, like that available on Microsoft's Zune.