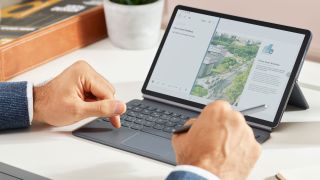 Samsung is one of the few Android tablet manufacturers that continues to plow ahead with innovation in the space, and the next step for the company seems to be adding 5G technology to a slate.

According to a new listing on Samsung's website, the company is planning on unveiling a new version of the existing Galaxy Tab S6 that comes with 5G connectivity.

Samsung hasn't officially unveiled the tablet yet, but the Galaxy Tab S6 5G appeared on the Korean version of the website, on a promotions page. The listing is still up at the time of writing, and it's clearly a separate product from the existing Tab S6.

Considering this is on Samsung's own website, the listing seems to be pretty strong evidence we'll be seeing a 5G version of the tablet. It's likely to be the first product of its type that will allow the new internet technology to be used directly on a slate.

We've seen Samsung introduce 5G onto its smartphones like the Galaxy S10 5G, but this is the first time we've heard of any manufacturer offering the technology on a tablet.

It may well be this is just a slate destined for the company's home market of Korea. It's rare the company doesn't bring its products worldwide soon after release in Korea though, so we may hear more about it in the coming months.

Samsung may introduce us to the Galaxy Tab S6 5G at CES 2020 - at the start of January in Las Vegas - plus the company is rumored to be hosting an event for the Galaxy S11 series in February where it may also speak about the product.