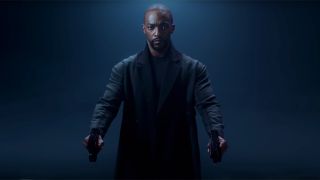 Just weeks away from its arrival at the end of the month, Altered Carbon 2 has finally received its first proper teaser trailer and, not surprisingly, it focuses on the show's new star, Anthony Mackie (Avengers: Endgame).

For those who are unfamiliar with the show's premise, Altered Carbon takes place in a distant future where human consciousness can be backed up onto 'stacks', allowing people to basically live forever by swapping bodies (known as 'sleeves').

Don't go chasing after your ghosts

"Technology has conquered death, but with endless future... comes endless past," says Kovacs, further stating that spectres "cling to us like shadows," suggesting our hero will be seriously haunted this season by the people he's left behind.

Although the teaser only runs for a brief 60 seconds, we get numerous tantalizing glimpses from the upcoming season, along with shots of Mackie looking pensive and wielding dual guns that just fly directly into his hands.

Altered Carbon 2 will arrive on Netflix on February 27. You can check out the teaser trailer below.