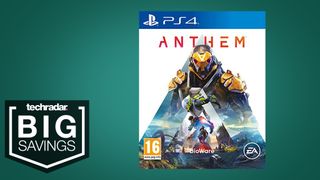 BioWare's Anthem was far from the year's best game. But with rumours of an overhaul coming down the line and significant price drops on the Destiny-style co-op shooter, it's reached a price where it's worth picking up as a curio.

Currys has Anthem on both PS4 and Xbox One for £4.97, less than the price of a pale ale in most major cities these days, and that includes delivery.

Anthem lets you play as a mech in a series of open world-based, co-op shooter missions. If you enjoy games like Destiny and The Division, you'll probably enjoy stepping into an Iron Man-esque robot suit and squashing a few big aliens. Its main problem is repetition, but what wasn't worth £45 a few months ago now only really costs that most valuable resource of all: time (and the aforementioned £4.97).

Anthem: £4.97 at Currys
BioWare's Anthem was far from the year's best game, but now it's less than a pint to have it delivered to your house. That's well worth it for a couple of hours of Iron Man-esque stompy robot shooting. This is the PS4 version, but the Xbox One edition is discounted too. View Deal

For under £5, you'll get over 20 hours of game, and about five of those will be great fun. But who knows? Maybe one day Anthem will be updated to reach its full potential.

If you're looking for Anthem on-sale wherever you are, check out this quick price comparison chart: