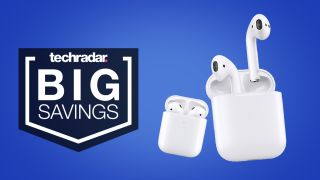 These cheap AirPods deals have, in many instances, returned to their Black Friday price tags, meaning you can pick up the world's most famous earbuds for even less right now. That's right, shoppers can grab the Apple premium buds for as little as $129 / £124 this week, putting these AirPods deals on par with Black Friday level discounts right in the middle of January.

You've got two options here - the cheaper AirPods deal with a standard charging case, or the slightly more expensive AirPods with a wireless charging case. The cheaper prices listed above represent the standard second-generation AirPods sales, but you can also pick up the set with a wireless charging case for just $159 / £158 this week. It's a fantastic time to be out on the hunt for cheap AirPods, with excellent sales offering clearance level prices on one of the hottest products of the year.

Apple AirPods were first unleashed back in 2016, but since then we've seen a second iteration come in 2019 (the AirPods deals below all offer the 2019 version). With their well-known tap gestures and obviously sublime integration with Apple's range of products, AirPods have taken the world by storm in their four years of existence.

Today's best cheap AirPods deals in the US

Apple AirPods with charging case | $129 at Walmart
There's still time to pick up second-generation AirPods for a great price over at Walmart. We've only seen this price over Black Friday so far, so now is an excellent time to grab a pair of luxury earbuds if you missed out in the seasonal sales.

Apple AirPods with wireless charging case | $159.99 at Amazon
If you fancy going wireless with your charging, you can pick up the boosted case for an extra $30 this week. Usually coming in closer to $200, this $159.99 price tag is an amazing steal right now.

Apple AirPods with charging case | £124 at Laptops Direct
The standard second generation of Apple Airpods are still on sale at Laptops Direct for just £124. That's ever so slightly cheaper than we were generally seeing them over Black Friday, making this cheap AirPods deal a winner.
View Deal

Find more Apple AirPods sales right here on TechRadar, or check out these Beats headphone deals for another flavour of Apple headphones.