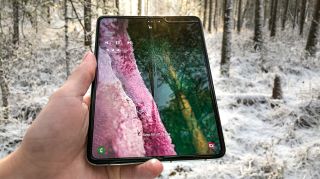 The Samsung Galaxy Fold could see a successor in 2020 (Image credit: Joonas Nurmela)

If you were looking forward to a new Galaxy Fold successor though, all is not lost, because it seems like one could still be on the cards for 2020.

This news comes from Dutch-language Samsung phone rumors website GalaxyClub, which has uncovered a codename for an unspecified Samsung phone: 'Winner2'. The riddle of what this refers to is demystified somewhat by the fact that the original Galaxy Fold was known as 'Winner' – which suggests this new codename is very likely a new 'true' Galaxy Fold.

It's not clear exactly how GalaxyClub got hold of the codename, but generally the site has a good track record when it comes to sharing leaked information and rumors.

'Winner' was in retrospect quite a bold codename for a phone that had its release date pushed back months because it kept breaking, but presumably Samsung is confident that the Galaxy Fold 2 won't have this problem, which is why it's going with 'Winner2'.

GalaxyClub also found a couple of variations of the codename – 'Win2' and 'Win2 5G', suggesting that there will be 4G and 5G versions of the device. The Samsung Galaxy Fold is available in both 4G and 5G variants, but most areas of the world only got one model – for example the 5G version is available in the UK but only the 4G phone is sold in the US.

A new – and presumably improved – Galaxy Fold will be good news for anyone who wants a foldable phone, but who isn't a fan of the clamshell design of the Motorola Razr (which will likely be the form factor Samsung adopts for the Galaxy Z Flip). We don't know much more about the device just yet, but we could see it shown off around the same time as the Samsung Galaxy Note 11 (or Note 20) phones.

That date is still a long way off, and Samsung is expected to have a slew of new 5G phones (and at least one, but possibly more, foldable phone) out before then. The big day for new Samsung phones is February 11, when we'll see the Galaxy S20 series in all their glory – we'll have all the news and rumors in the build up to that launch, so stay tuned.