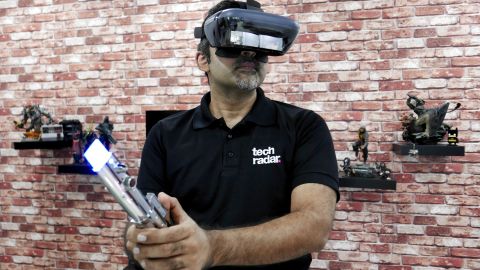 The Lenovo Star Wars: Jedi Challenges is a fantastic idea that is clearly a first-gen product. But Lenovo is definitely on to something and with a bit of hardware and software updates, it could turn into an ultimate toy for Star Wars fans

Fans of Star Wars (or any sci-fi/fantasy story) have long yearned to be a part of their favorite movie’s universe. From battling waves of droids to donning that legendary Jedi cloak, it’s the stuff that connects us to our favorite characters and stories.

With recent advances in VR and AR technologies, becoming a part of a story you fancy is now more real than it ever has been. And that’s precisely the road Lenovo is taking you on with Star Wars: Jedi Challenges.

What's included in the box?

The three-piece kit is made up of a "Mirage" headset, a motion controller in the shape of a lightsaber and a tracking beacon. Instead of relying on a built-in screen, the headset allows you to mount your phone inside it, and uses mirrors to augment characters and scenes in front of you.

Cameras built into the headset work with the beacon to track movement, while the lightsaber controls your actions.

Strapping the Mirage headset is fairly easy with the adjustable straps on the top and the sides. While the unit is made of plastic, Lenovo has added soft padding where the headset rests on your forehead and cheekbones. There are three buttons on it that let you navigate, pause or exit the game.

What is missing is from the headset is a 3.5mm jack for a better audio experience. The volume levels while playing Jedi Challenges is on the lower side because it’s your phone’s speaker that being used. A dedicated audio port would have definitely helped create a more immersive experience.

The shiny lightsaber should have been the star of the kit but we found tit to be a bit on the light side. No, we’re not talking about the light side of the Force, but a bit more weight would have definitely made it feel more realistic, especially when swinging it around. It has two buttons on it - the larger "Blade" button powers it up in-game, while a second "Force" button centers your view and controller.

In theory, Lenovo’s kit sounds like the stuff dreams are made of, but Jedi Challenges comes with its own set of challenges- starting with the setup process.

You need to separately charge three devices- the headset, the lightsaber, and your phone, and because battery times on all of these devices varies, there is a good chance that you will end up without power on at least one of them.

Lenovo recommends a clear area of 1.5m x 3m to set up Jedi Challenges but we found it to work well in almost any space. Though, in smaller space, you'll probably need to press that re-centering button on the lightsaber more often.

Once you have all components charged, you download the Jedi Challenges app from the Apple or Google app store, pair the lightsaber controller to the phone via Bluetooth and slide the phone into the headset through a tray.

Although this tray is made of easy to handle materials, the edge where it slides is very sharp - we ended up cutting ourselves while pulling the tray out, so proceed with caution.

With the tray in place, there is a tiny cable that needs to be connected between your phone and the headset. Lenovo bundles Lightning and USB cables  (newer Type C as well as older micro USB), so most smartphones should be usable with this kit.

We tried Jedi Challenges with an iPhone 7 Plus but faced connectivity issues with the headset not being detected. We then switched to a Galaxy S8 which worked fine, as did the Moto Z2 Force. You might want to check the compatibility of your phone with the kit before you decide on getting one.

We thought of leaving a dedicated phone inside the kit, but the issue is that you cannot charge the VR headset or the phone when they’re connected to each other. Thus, recharging would require you to disconnect the devices and individually charge each one of them which is not very convenient. A single power connector on the headset to charge both the headset and the phone would have worked a lot better.

Once you do have everything set up, playing Jedi Challenges is a lot of fun. Characters appear in mixed reality looking very much like holograms from the Star Wars universe - think back to Episode IV and the message Princess Leia sends for Obi-Wan Kenobi through R2D2.

The game starts by introducing you to the Archivist, a new character in the Star Wars Universe that acts as a guide. You’ll walk through a brief tutorial set on Planet Naboo, where you learn to use the lightsaber for attack and defense, by battling waves of droids, with a final encounter against Darth Maul.

When done with Naboo, you move on to other planets with the final destination being "The Core" with unknown challenges. Besides lightsaber battles, Jedi Challenges also features Holochess and Strategic Combat that, unfortunately, aren't half as much fun.

Update: Lenovo shared with TechRadar that it has issued a free update to users, which includes "new characters, lightsaber battles and gameplay levels on the planet Crait – as first seen in the film, Star Wars: The Last Jedi." There's more to this update, also packed with "new experiences including the chance to duel two Praetorian Guards at the same time; three new Strategic Combat levels; and the introduction of Porgs for the first time in augmented reality as in-game rewards."

One significant issue with Jedi Challenges is that the phone sits towards the front of the headset making it heavy and uncomfortable after a few minutes of gameplay. We were constantly trying to adjust the headset and balance it, which distracts from the gameplay experience.

You also need to make sure you turn off notifications or switch Wi-Fi/LTE off, because being interrupted by a phone call in the middle of fighting Darth Maul is distracting to say the least. Finally, with anything that’s projection based, darker environments work better than a room full of light.

Star Wars: Jedi Challenges works if you think of it as a casual entertainment session rather than a full blown game. It could be a lot more fun if it supported a multiplayer mode - think of all the crazy Star Wars-themed parties where you could duel against others with virtual lightsabers. But as a single player experience, it loses its appeal fairly quickly.

There's no denying that Jedi Challenges is a very cool piece of tech but it’s also a first-gen product that comes with its set of problems. We hope Lenovo gives it more love and attention, because they’re clearly tapping into a whole new genre of games that we see becoming mainstream in the future.