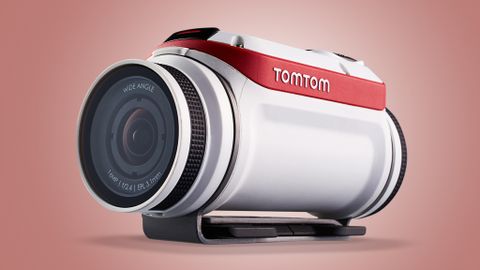 Built-in motion sensors, GPS, manual tagging and easy operation are only the start of this ground-breaking action camera. The shake-to-edit feature cuts out the pain of editing and lets you upload your movies quickly and without fuss.

While TomTom is a company best-known for their mapping and navigation services – just check out how often they appear on our best cheap sat nav list – but the TomTom Bandit marks a strong foray into the world of action cameras.

Often the world of extreme sports is as much about capturing and sharing the action as it is about taking part in the sport itself. You can capture the action on small lightweight cameras, which you can attach to yourself or a piece of kit, and the most high-profile name in this market is GoPro.

But it's important to remember that GoPro cameras aren't the only option. There are now some serious rivals that might be better suited to you. Although TomTom might be relatively new to this field, the brand has done its homework with the Bandit.

It has a white body that's detailed with a red band, which instantly makes the Bandit stand out and that's perfect for an action cam.

But it's not just about the looks. This small camera features GPS, built-in motion and heart rate sensors, 4K video and slow motion capture alongside a breakthrough mobile app. You only need to spend a short time with this camera to realise that the GoPro Hero line now has a serious rival.

TomTom's attention to design detail and usability is apparent from the outset. The exterior of the camera is neat and tidy with a large, easy to read LCD – though this is not a live view screen; it merely shows menu settings alongside the camera's selected mode and options. A separate four way control panel and stop button join it on top, while the back of the camera features the start and highlight button – this enables you to instantly tag clips as they're recording. On the base is the mount that enables you to attach the camera to yourself or your kit, and aside from that the rest of the body is clean.

Video resolution and frame rate is key to capturing the action and the Bandit meets that demand with 4K at 15 frames per second (fps), 2.7k at 30fps, 1080p at 60/30 fps and 720p at 60/120fps, enabling slow motion capture. The Bandit can also shoot time-lapse sequences and capture stills at up to 16 megapixels.

It's available in two packs; the Base Pack includes the camera, adhesive mounts and GoPro adapter, while the more expensive Premium Pack includes a bike mount, 360 pitch mount, waterproof lens cover and remote.

There are quite a few differences between the design of the Bandit and other action cameras, showing that the designers have really thought about who and how this camera will be used.

The battery pack is a good example as it offers three hours of use when recording 1080p at 30fps. This does drop if features such as Wi-Fi are in use, but it's still very respectable. Power is supplied through the Batt-Stick, a unit that slots into the back of the camera. This features a USB connector and MicroSD card slot, so there's no need for additional cables or a card reader – this unit does it all and is a really nice touch.

It also means that if you know you're not going to have access to mains power you can carry additional Batt-Sticks with you. Under the Start / Highlight button on the back of the Batt-Stick is a small rubber flap that protects the port for the optional USB connection cable.

The base pack is not waterproof out of the box and arrives with the standard lens cover which is just splash proof. However, using a similar twist release system as the Batt-Stick, the lens cover can be removed and replaced with the Dive lens cover – this can be bought as an optional extra and offers up to 40m water proofing.

The final hardware related feature is the mount, and this is a completely new mechanism that uses two spring loaded clips and slots to attach. There are a series of mounts for attaching the camera directly to helmets, bikes and boards, and TomTom has also released a GoPro mount adapter which is included in both Base and Premium Pack, enabling you to use the camera with any standard GoPro mount.

The way the mount attaches to the camera is another feature that differs dramatically to anything else we've yet seen on an action camera. The camera part of the mount can be rotated through 180 degrees around the body enabling you to easily position the camera as needed. However, unlike the Drift series of cameras, which have a rotating lens that changes the orientation of the footage, the Bandit's mount rotation is really designed to enable you to rotate the camera into the correct orientation – this makes the camera extremely easy to mount.

Action cameras should be easy to use and the Bandit certainly scores for usability and navigation. You switch it on using the Start button on the rear, and a small flashing GPS icon can be seen in the top left of the LCD, showing that the camera is attempting to pick up a GPS signal. In our test we found that the Bandit would usually connect in less than a minute. Also along the top are the MicroSD card symbol that shows that a card is installed and the battery power indicator.

The main part of the screen displays either the mode or settings and these are navigated using the large Control Button. The initial screen enables you to select the mode, including Photo, Video, Slow Motion, Time-Lapse and Cinematic. Selecting one of these takes you to a screen, depending on mode, that enables you to connect to Wi-Fi, check the settings of the inbuilt sensors, such as speed or a connected heart monitor, and the MicroSD card capacity (hours remaining).

Compared with those on many other action cameras, this menu might seem simple with far fewer settings and adjustments, but actually for a camera that is simply designed for you to get out and capture the action this is really all you want. This simplicity of modes and settings is reflected in the slow motion and cinematic options, using easy to understand terms that will enable anyone to pick up the camera and understand what each mode and option is.

By default, the Slow Motion feature drops the full HD resolution down to 720p but enables a frame rate of 120fps, and the result is that for every one second of real time you'll get four seconds of smooth slow motion playback – the resolution and frame rate can be adjusted, though. Cinematic mode gives you access to 2.7k and 4k shooting, but the 4K ability is limited to 15 fps so while the footage has a huge resolution motion can look a bit stilted in playback. However, as a compromise between 4K and Full HD there is the option to shoot 2.7K at 30fps. This frame rate and resolution is just enough to look good on a 4K screen with smooth motion.

As a camera for recording the action it's all very simple and along the lines of many other action cameras but for the Bandit there's a whole lot more once you connect to the app.

To connect the camera to the mobile app, you switch on Wi-Fi by pushing up on the four way control panel, then swap to your mobile device and select the Wi-Fi network from the list in the settings. The TomTom Bandit app is a free download from the apple store and an Android version will be available soon.

Once loaded and connected, the app displays a live stream of what the camera sees instantly appears on the app's interface. This initial screen also enables you to quickly switch between the different modes and adjust the selected mode's settings.

The speed of this live view is a step up from any other action camera, with little delay between what's happening and what appears on screen – with other action cameras, there is always a noticeable delay, so this is a huge improvement.

Clicking the menu button, illustrated by a circle with three small dots, brings up the other sections of the app, enabling the Viewfinder, My Library, Create a Story, Camera Status and Preferences. The Viewfinder option is the default screen. My Library shows all of the files recorded on the camera and Camera Status and Preferences are really just show information about the camera.

The Create a Story section is where this app really stands out. You just shake the mobile device and, based on highlights taken from the built in sensors such as GPS, accelerometer, gyroscope and pressure meters or from footage that you have highlighted, the App quickly edits and builds a compilation movie. This process takes seconds and the selection of shots is impressive thanks to the data the app reads from the sensors. Each clip is edited to just a few seconds' action, creating an exciting and engaging video short ready to upload and share.

If you find that there is a clip or two that you don't want then you can scroll through the saved clips and remove or add clips as required. If you decide that you want to manually add highlights then clicking the Add Highlights icon rather than shaking the mobile device enables you to compile your selection manually. There are a couple of additional features that finish the app off nicely including a speed and G-force overlay and the ability to add a soundtrack from your music library. Once finished the video can then be processed, saved and uploaded to your choice of destination.

Action cameras are about capturing and sharing the moment and while many enable you to record at incredible quality few enable you to so easily share that footage without spending time at a computer editing.

The video quality is excellent, showing plenty of detail well saturated colour, and the Bandit copes well with changes in exposure. The three hours of recording time at 1080p at 30fps means that this small camera won't run out of steam before you do, and USB charging and the availability of additional battery packs means you can easily carry a reserve if needed.

The Create a Story feature really makes this camera stand out – it makes it the most complete and engaging action camera on the market. The Bandit offers a great blend of features and quality, and while you do need to buy the additional waterproof lens cover to protect the camera during watersports, it's not an expensive extra, and it's included in the more expensive premium pack.