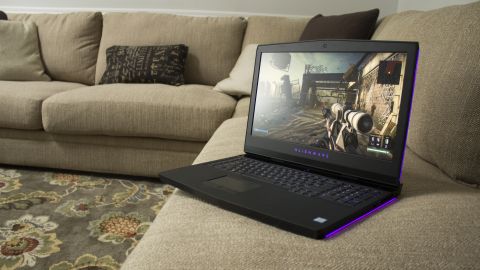 Sporting a more powerful processor, cool looks and a strong range of prices, the Alienware 17 R4 may be your best bet if on the prowl for a 17-inch gaming laptop.

Now that Intel has finally released gaming-grade versions of its  latest “Kaby Lake” processors for gaming laptops, you can finally purchase an Alienware 17 R4 and enjoy it at its full potential.

In traditional Alienware fashion, this magnificent monster is decked out in LEDs and ranks top-notch in performance. If it weren’t for the mediocre battery life and noisy fans, the Alienware 17 R4 wouldn’t be far off from perfection. Still, price for performance, Dell’s biggest Alienware laptop remains competitive with the wildly more expensive Razer Blade Pro.

Here is the Alienware 17 R4 configuration sent to TechRadar for review:

The Alienware 17 R4 is available in the US as well as the UK and Australia, though its starting specs and prices vary drastically.

In the US, you can score the cheapest model for $1,299, equipped with an Intel Core i7-7700HQ, a 2GB Nvidia GeForce GTX 1050 Ti graphics card (GPU), 8GB of RAM and a 1TB HDD. Considering the GPU can’t be replaced over time, this configuration is tough to recommend at such a steep cost.

At TechRadar, we were sent a built-to-order model that would theoretically cost $2,699 (£3,017, AU$5,369) for the absolute highest-end components available.

While Max-Q laptops, like the Asus ROG Zephyrus, might lead you to believe otherwise, the Alienware 17 R4 does boast a thinner chassis due to what Dell calls its ‘Hinge Forward’ design. This design pushes the heatsinks from underneath the keyboard to the rear of the device.

Despite allowing for better thermal design power (TDP) and a slimmer profile, this choice also makes the Alienware 17 R4, for lack of a better description, loud as all hell. While playing more demanding triple-A titles, like Deus Ex: Mankind Divided and Nier: Automata, the fan volume can be a bit distracting, especially without the aid of noise-cancelling headphones.

Otherwise, all the ingredients you’ve come to expect from an Alienware laptop remain intact. With 12 LED-backlit zones in total, everything from the Alienware 17 R4’s svelte edges to its trackpad can be customized to one of 20 different shades and colors.

These look especially attractive surrounding the tri-sectional engraving on the lid of the machine, where the Alienware 17 R4 reminds us most of Dell’s monolithic Alienware Area 51. The only disappointment there is that – aside from the ominous extraterrestrial on the back – much of the glitz doesn’t carry over from the front.

There’s plenty to love about the inputs on the Alienware 17 R4. Although there are no mechanical switches on the table, the upgraded Alienware TactX keyboard makes the best of what it has to offer.

N-key rollover, for instance, will appeal to those looking to pull off tricky combos and shortcuts without any concern that their keypresses won’t be recognized. What’s more, Dell claims that this is the only laptop keyboard there is bearing 2.2mm of key travel. In short, you shouldn’t have to worry about accidental keypresses or your commands not being recognized.

Both the keyboard and the trackpad feel uncharacteristically comfortable for a gaming laptop. If a lack of portability due to its sizable weight and dimensions isn’t a concern, then you can rest easy knowing the Alienware 17 R4 is just as suited for work as it is for play.

It should be noted that, while forums online will suggest otherwise, there’s an annoying default trackpad setting that can be disabled. It’s called palm rejection, and it limits your ability to use the trackpad while any key is pressed. You can find it and turn it off in your computer’s additional touchpad settings under sensitivity, if you plan on gaming without a mouse.

That said, gaming with a trackpad is almost always advised against. So, if you’re spending over a grand on a new gaming laptop already, definitely consider shelling out just a fraction of your funds on a new gaming mouse as well.