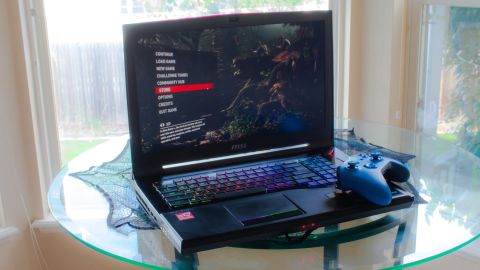 The MSI GT75 Titan is a powerful, bulky gaming laptop that plays games like an absolute dream, but is taxing to transport anywhere. Anyone who wants no-holds barred performance – with portability being a distant second thought – should give this gaming laptop a look.

Over the last few years, there’s been a growing trend among the best gaming laptops: make them thinner, lighter and more powerful than ever before. But, even among all the Razer Blade and MSI GS65 Stealth laptops of the world, sometimes you need something a little, well, bigger.

Enter the MSI GT75 Titan, a hulking behemoth of a gaming laptop that can handle anything you could possibly throw at it – putting even most of the best gaming PCs in their place. Rocking an Intel Core i9-8950HK processor, 32GB of RAM and an Nvidia GTX 1080 graphics chip, there won’t be a single game that can slow this thing down – as long as you have the cash.

This laptop is prohibitively expensive for most people, but if you have the cash to spare, and you don’t want to compromise, you’re not going to do much better than the MSI GT75 Titan. In our view, it's one of the best MSI gaming laptops of 2019.

The MSI GT75 Titan is undeniably an expensive device, so you’ll need a serious bankroll in order to get your hands on it.

Compared to similar devices, like the the Asus ROG G703GI, which starts at $3,699 (£3,499, AU$4,599), the GT75 actually seems like a better deal. The Asus machine rocks the same starting processor and graphics configuration at its starting level, but with half the RAM, while still costing $300 (£100, AU$30) more. We know that it sounds a little crazy mentioning ‘value’ on a laptop that costs more than three grand, but considering the hardware on offer, it fits.

However, the more compelling option is going to be maxing this baby out. If you have the $4,499 (about £3,500, AU$6,226) that it costs, you can spec this thing out with 32GB of RAM, 2TB of storage – a 1TB SSD and a 1TB HDD – and a 4K UHD display with Nvidia G-Sync. And, unlike many laptops with 4K displays, the MSI GT75 Titan can actually handle gaming at that resolution – it’s worth the cash if you’re looking for a straight desktop replacement.

The MSI GT75 Titan defies all the trends of the last few years and delivers a product that looks like the tank that it is. And, that shouldn’t be surprising, considering the manufacturer. Sure, MSI delivered the ultra-svelte GS65 Stealth, but the GT75 Titan is the direct opposite – big, thick and heavy, this isn’t the kind of laptop that you take into public unless it’s to a tournament.

But, as a laptop that will likely stay at home, it’s perfect. This thing is packed front to back with RGB lighting – from the keyboard to the touchpad. This isn’t a device that’s going to blend into the background, it’s going to demand your attention, which might be something that rubs you the wrong way. Luckily, you can turn off the lights – but you’ll still have to deal with the loud fans.

Such a large device would be worthless if it wasn’t solidly built, and luckily, the MSI GT75 Titan is a sturdy device. Both the lid and the top half of the bottom have a smooth aluminum finish that feels nice to the touch. However, the bottom half of the base is plastic and has a bit more give to it. But, we recognize that’s necessary with all the ventilation that the powerful hardware requires, not to mention the price.

What this thick design is uniquely capable of, though, is a sweet mechanical keyboard from SteelSeries. We’ve never used a keyboard in a laptop that felt this good for gaming – period. You’re going to want to use a standalone gaming mouse, just like with any gaming keyboard. Overall, n our experience, the keyboard here is top notch with nice, deep travel and very tactile feedback.

There are some specialty keys on the right side of the keyboard, too, that control everything from fan speed to lighting profiles. These are all functions that can be controlled through software, but it’s way more convenient to just hit a button.

We need to talk about that trackpad, though. We get that the target audience of this laptop isn’t going to be using the trackpad, but it just does not match the quality of the rest of the device. The tracking is accurate enough, and gestures work fine, but it’s so small. We also don’t like dedicated hardware buttons on trackpads, but that ultimately boils down to personal taste. Either way, you’re going to have to add the cost of a best gaming mouse to the already-high price of this laptop to get a pleasant desktop experience.

Luckily, there is a relative ton of ports to choose from to plug in your peripherals. There are five USB-A ports, one Thunderbolt 3 port, one HDMI port, a Mini DisplayPort, two line out and two line in ports. That’s not to mention the standard LAN and SD card reader. You’re going to be able to use basically any accessory under the sun with the MSI GT75 Titan, which makes it an even more compelling desktop replacement device.

We’re going to be honest, if the display and speakers weren’t up to snuff on the GT75 Titan, we would be a little upset. Thankfully, this might be one of the best implementations we’ve seen to date. Sound is full, rich and enjoyable on these speakers, which is likely due to the subwoofer included here. That’s right, this laptop is so big, it has a sub. Watching movies and listening to music is a treat on this laptop. Even playing games – which, let’s face it, is 90% of what this desktop replacement is meant for – sounds awesome.

Then you have the screen, and boy, it’s beautiful. MSI went the extra mile to make sure that the display on this thing is top notch. It’s nice and bright and the colors just pop off of the screen. Plus, it has G-Sync, which means that gameplay is silky and smooth, even at 4K. And, having a technically ‘portable’ machine that has a built-in 4K G-Sync panel is surely a nice thing to have in a laptop that costs as much as this one.

However, we have to mention the entry model’s display. On the entry model, you can get a 1080p panel with a 120Hz refresh rate. And, we think that’s the perfect monitor for a GTX 1080 – not only are you going to be able to pump up all of the settings, but you’re going to get a much smoother gaming experience. Is it worth sacrificing the extra 16GB of memory and the SSD? That’s up to you, but that’s a sacrifice we’d be willing to make, and you can always upgrade the RAM and storage later.